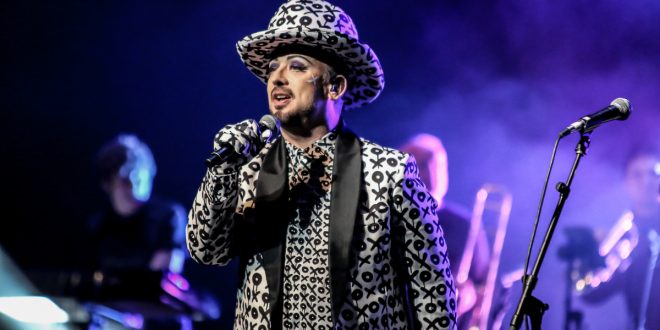 Culture Club has been around since the 80’s when MTV was in its prime, and music videos were something you ran home after school to watch. Boasting some of the catchiest tunes to ever hit Billboard’s Top 10, Culture Club has reunited their original lineup (Boy George (lead vocals), Roy Hay (guitar and keyboards), Mikey Craig (bass guitar) and Jon Moss (drums and percussion)) to celebrate a thirty-five year career on the road across North America this summer.

True to the band’s legacy, the crowd that filled the prestigious AuRene Theater in Ft. Lauderdale this past Friday evening was refreshingly diverse spanning a generational gap from boomers to millennials and a fair share of younger children of all genders and race. The venue was packed tight and bristling with that pre-show anxiety as fans eagerly clapped from their seats in the minutes leading up to the scheduled start.

The band hit the stage with three back-to-back bombastic classics that easily set the tone for the rest of the night. Kicking it off with “Church of the Poisoned Mind,” “It’s a Miracle” and “I’ll Tumble 4 Ya,” the crowd was immediately on their feet – laughing, dancing, singing and celebrating the moment.

Throughout the show, I was amazed at the entire ensemble: brass section, keyboards, two drummers, two guitarists, a bassist, three incredible backup singers and of course, Boy George who’s intensely charismatic personality captivated the entire audience. The band’s energy was outstanding, their performance even more so, but it was their ability to seamlessly entertain. George would sometimes slip in a story or two, casually quip with the band and the audience.

The set ended with an explosive performance of “The War Song,” with fans singing so loudly, it was actually difficult to hear the band. The night ended off beautifully with the encore of “Karma Chameleon,”  heartfelt cover of David Bowie‘s “Starman,” whom George described as an inspiration and “Bang a Gong.”

To sum it up simply, the entire show was phenomenal. Much more than I could have ever expected.

Check out some of the photos from the set below.

Metal!!! I am never without a camera, I am never without music, I can not live without coffee... I cook, I manage a band (shameless plug Modern Day Outlaw), I shoot people with my camera, and I drink tequila and whiskey... That's me in a nutshell! Follow me on Facebook, Twitter, and Instagram.
@@Melly1172
Previous Album Review: DragonForce – Killer Elite
Next Art of Dying Announce US Headlining Tour Dates