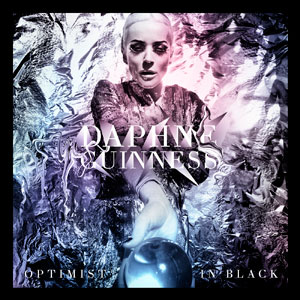 Daphne Guinness, “artist and cultural icon”, is releasing her debut album Optimist in Black which takes trippy 60s/70s sounds and dramatic tones to another atmosphere.

With a Jefferson Airplane vibe, “Fatal Flaw” is a grazing, midtempo number with dreamy dark vocals by Guinness. She opens the track by singing“love is a sort of madness,” and it sets up the rest of the song. With lyrics that are pure visual masterpieces, it beefs of the content of the tune which uses a very simple strategy when it arrives at the chorus. Against a backdrop of a wall of sound Guinness repeats over and over again the title of the song, belting in a rock fashion. It’s certainly catchy, and easy to remember, and the combination between the intricate, well planned and slightly off kilter in the best way verses with the more in your face traditional hook all help to make the track one of the best on the album and cement Guinness and her sound into today’s music scene.

“Magic Tea” is pure energy and pep and full of the whimsy that Guinness has carved out for herself. It’s an otherworldly, outerbody trip from start to finish and plays up the 60s/70s mood as Guinness repeatedly uses the phrase “I am you and you are me” evoking The Beatles. She even mentions one of the decades by name singing “open up your world at will to the 60s where I’m living still.” But make no mistake, Guinness is not trying to merely replicate an era, and it never comes across as derivative. Instead Guinness just embodies the decades of the past, the vibes pulsating within her. It’s all something that is reminiscent of Lady Gaga meets David Bowie but Guinness holds her own, a star and legend in the making.

“Marionettes” is spellbinding right from the first few notes . It opens will a full string orchestration that sucks listeners in and sets up the theatrical, Tim Burtonesque dark lyrics and dramatic, sweeping vocals by Guinness. It’s the type of song that is so visual it’s breathtaking and is sure to make an impression on listeners as this is the kind of music that Guinness does best. She makes no apologies for the melodramatic nature of the tune, embracing it completely. and turns it into the most memorable song on the album and it’s really no surprise what with lyrics like these “spinning your web, your ectoplasmic ball of gloss/handing around your sweetly poisoned candy floss/to the dolls of your desire/come hither, come higher/stand closer to my fire.”

Meanwhile “The Long Now” has a 60s meets 80s feel but is firmly planted in modern times, in fact it is the most radio friendly track on the entire album. Pop/alternative at its peak perfection is displayed here and both the verses and the chorus come together to create a magical work of art. Here Guinness is playing the frontwoman in her own show with lyrics like “you don’t know what to do with a girl like me in a tight sweater.” It’s bound to get many toes tapping, and this shift in musicality, less dramatic and more pop/rock and fun, is a welcome change and showcases just how diverse an artist Guinness is. With lush and punchy vocals, and a commanding leading performance it’s hard to believe this is Guinness’ first album. It’s without a doubt the best track on the LP and stands out in a genre bending, infectious way.

And though the majority of the LP is exquisite and magical not every track is worthy. “Joke” fails slightly with its bare bones approach, something that may work for other artists but not with Guinness on this track. It’s nice to hear her vocals so clean and pure but it’s the type of tune that needs more of a backing to support Guinness performance and give it a fuller sound. Weirdly enough the title song does not live up to the hype, as it drags a bit and while it still contains great lyrics, it’s just not as memorable a song as one expects a title track to be.

Nevertheless jump on the Daphne Guinness bandwagon now, and tell all your friends about her because a star is born.