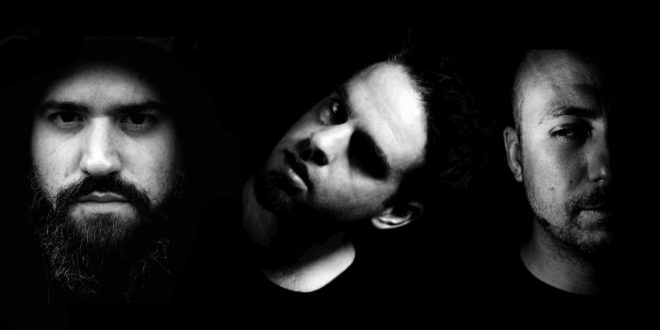 Since 2008, Post Death Soundtrack has showcased the creative finesse of Kenneth Buck, Steve Moore, and Jon Ireson. The trio’s collaboration is long distance via Calgary, Vancouver, and Toronto, utilizing the power of the internet to create a wholly individual sound. Their dingily distortive industrial and dark wave aesthetics on their debut album, Music Is Weaponry, have earned them sizable critical acclaim. However, their follow-up efforts would harness a product showcasing considerable artist maturity, nearly a decade to their formation.

What ultimately resulted was their latest album, The Unlearning Curve. It is vastly improved in terms of stylistic and conceptual presentation. The riffs are warmer, the vocals are bigger, and the atmosphere expansive. Such a change brings plenty of space, a greater freedom to experiment and discover an infinite spectrum of musical horizons. Still plenty of blunt, vertical arrangement akin to the band’s initial influences, except now, there’s a certain expansiveness to them. Conceptually, the album centers around the phases during a period of instability, namely the abandonment of traditional thought, the distortion of reality, and the outcome that eventually occurs.

On the first track, “That Which Is,” I envisioned that all-too-familiar, yet pertinent process of the soul leaving the body. As the song played out, I tried thinking of the type of realm to which the soul would be transported. It seemed to be neither heaven nor hell—more like a long form comatose state. The percussion is constant and ticking, but with a bit of gravity to it. In its opening lyrical content, there’s an interesting contrast between its portrayal of assured strength and the tension-fueled means by which they are delivered. Throughout the song, my attention swayed in multiple directions. I couldn’t decide whether to focus on each element of the song or the entire song as a whole. The light synth-based accompaniment, as well as the equally light, almost Doors-esque leads and percussion, is what makes the song stand out. The harmonies are rich and well-blended, and especially demonstrate the singer’s ability to hold the track together. “You Can’t Go Back,” the first of the album’s singles, maintains the textural consistency of the previous track while venturing toward more straightforward dark wave. To an extent, it’s as if the subject of the song is being pushed toward their gut instincts and is obligated to move ahead, due to the outright corruption of a place they once called home. The smooth, gliding lead melodies represent a fantastical, drifting mental state, while the sharp feel of the drums is of one that appears conscious and vigilant. In the later portion of the song is where everything undergoes some type of implosion: the mind drifts further and further from what it knows until it completely corrodes, resulting in an ironic ‘release from pain’, as the lyrics state. “Our Time Is Now,” the third track, is a full stylistic homage to Nine Inch Nails, from the piano-based intro to the abrasion of the beats and synths. This is not a bad thing by any means, as the song keeps focused on the album’s concept. Again, there is a subtlety in the tonality of the vocals. The remark the subject of the song’s earned invincibility, proclaiming “You have the power./They can’t touch you,” but with undertones of dark, pitch-bent layering, indicating a duplicitous, supernatural protection. From then on, there is a shift in the level of control in “Beauty Eyes I Adore.” The perceived protector is revealed to be a demon and shows a fascination with its victim’s hampered soul. The accompanying harmonies give the lead vocals a ghostly feel. However, the delivery of the presentation is fully realized when the percussion and synths kick in. Their unorthodox time signature brings imagery of a conflicting decision–to struggle and sacrifice dignity or be pulled in for a temporary thrill of infatuation. Ultimately, the extent of control is revealed in the song’s final line “Tonight, I believe in nothing/And you believe in me”. To me, one of the of the standout tracks that showcase the album’s atmospheric side is “Arrhythmia Dreaming”. A majority of it is captured by the song’s bass synths, but also in its shifting heartbeat-like rhythms. The anxiety-driven perspective of the song fits quite well with the song’s electronic vibe. It’s fair to call this song one of the album’s calmer moments, and its relatively early placement paces the album effectively.

The second single from the album, “Little Alice,” expounds on the damage done. Its lyrics delve into psychological abuse, namely the concept of one’s vulnerability being exploited. From the lines in the chorus, it is suggested that the victim’s spiritual faith is called out as an illusion, and leaving only danger to reside. I appreciated the song’s transitioning from static industrial instrumentation into thumping grunge, and how that shift plays through the remainder of the song. Toward the end, flange-based textural layering is progressively revealed, resembling a vividly painted musical hallucination of sorts. “Through the Gates” is another standout track, rightfully haunting as it alludes to the person’s soul floating in limbo. The residual scars from the abuse have turned to mere ‘scraps,’ while all their senses, as well as identity, have vanished. I enjoyed the song’s sense of pausing for dramatic effect, and the bleak nature of the chords had me spooked, yet stimulated all the same. Further, the penultimate and final tracks, “Dance with the Devil” and “Transform in White Light,” play as alternate endings to this album. Whereas the first track centers on a negative outcome—the doing away with all morality for good—the latter is positive, revitalizing the eternal nature of the soul, at the same time recognizing the true, pure faith in oneself, rather than demonesque supernaturality.

Overall, The Unlearning Curve might just as well be Post Death Soundtrack’s definitive album. There’s a patterned feeling of spiritual independence and abandonment each track with controlled emphasis on those elements. Harsher, rootsy industrial tracks are few and far between, but the room for those of the progressive, space-oriented variety feels welcome and very much needed. I’m curious to see where the band will venture conceptually, and am assured that this is far from the end.

I come from a family who is passionate about all things music. I learned to sing at an early age, and by 13, had my very own Fender Strat guitar. I tried my hardest at learning all that I could. Because I was born with cerebral palsy, I had to teach myself an adaptive playing style. I learned to write and record my own music, despite these difficulties. In college, I started making great use of my writing abilities by reviewing music, as well as copy editing. I guess it's best to stick with what you know, while welcoming a fair challenge at the same time.
Previous Gallery: Chic at Ascend Amphitheater Nashville, TN 7/6/16
Next Gallery: Bad Seed Rising at Warped Tour in West Palm Beach, FL 07.03.16