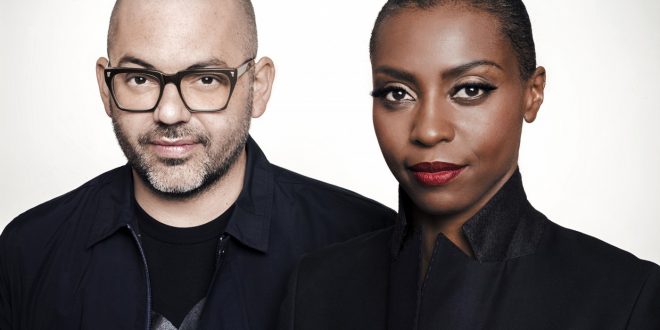 The first single from the album, “Light Of Gold”, is now available as an instant grat when you pre-order the album and for purchase/to stream on digital outlets.

It is an album that pursues its own musical path while returning to the roots of the sound that made Morcheeba a household name back in the late 1990s. It is, Ross explains, “what Skye and I do naturally when we make music together, and yet not necessarily a continuation of what we’d been doing with Morcheeba. It therefore felt only right to give it a new identity.”

It’s not the first time either of them has stepped outside of the safety of their familiar, long-term musical environment. Last year, Skye released her fourth solo album, In A Low Light, a beautifully subdued collection of luminous, electronic soul, while Ross stepped out with Little Mountain, a Laurel Canyon-flavoured trio that also features his wife, Amanda Zamolo.

Most of the record was recorded at their homes, an environment which allowed their creative flow to flourish without time constraints. They very much kept the record a family affair, as the only other musicians to play on the album is Skye’s husband, Steve (Bass), Skye’s 19-year-old son Jaega (drums), Ross’ wife Amanda (backing vocals) and Richard Milner, Morcheeba’s keyboard player for the last five years.

What emerged recalls the essence of Morcheeba’s international, platinum-selling Big Calm, while boasting a revived spirit and the mature experience that comes with two decades of making music.

Ultimately, SKYE & ROSS doesn’t signify the end of Morcheeba, but rather a purge of sorts. It was an opportunity for the two musicians who have very much represented the public face of their band to get together and see where their imagination took them.

Skye explains, “It was all very organic, and I was able to push myself vocally. Everything Ross sent inspired a melody and lyric almost immediately, whether it was a heavy fuzz guitar riff or intricate finger picking on an acoustic. I’ve always got a real buzz from Ross’s playing: it’s an absolute joy performing live, so it was great to be able to capture that energy on record.”