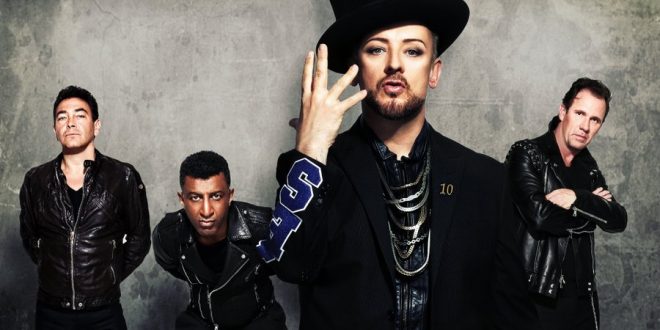 In 1981, Culture Club created a sound unifying the exotic and contemporary. Their presentation of reggae, blue-eyed soul, and dance elements, along with the visceral androgyny of front man Boy George, catapulted them to stardom just a year after forming.

International chart toppers such as “I’ll Tumble 4 Ya,” “Time (Clock of the Heart),” and “Do You Really Want to Hurt Me” are prime examples that justify such craft. Although the band’s commercial tenure would only last a short five years, their impact on British popular music—and simply music in general—continues to transcend across generations.

Reunited since 2014, the original Culture Club lineup of Boy George, guitarist Roy Hay, bassist Mikey Craig and drummer Jon Moss have just embarked on an ambitious world tour. It has already taken place Asia-wide and currently through North America. I had set out to interview both Craig and Moss—often called the beat of the group—who were under time constraints due to a hefty and demanding schedule. Even though our interview became impromptu, both members provided sufficient insight as to how a unified chemistry, regardless of cultural upbringing, is essential to the band’s success.

Mikey was the first to speak about his musical progression.

“I started out listening to black music; mainly Jamaican rocksteady in the late 60s and early 70s before it became reggae,” recalled Craig, who is of Jamaican descent himself.

He then mentions having the opportunity to travel to Jamaica at age 11.

“It was there that I began to become interested in the bass, and the sound of the bass, because it’s very prominent in Jamaican music.”

This very trip inspired him to consider picking up the instrument. Once he returned home, Mikey would proceed to make a notable acquaintance.

“When I got back to England, I began playing in my early teens. I was at a school where there were other bass players…namely Glen Matlock from a rock band called the Sex Pistols!”

From there, Mikey’s exposure began to escalate.

“[Glen] told me all about his band and their music. Then I began listening to alternative types of music.”

“I also got into alternative fashion as well, from Vivienne Westwood’s Let It Rock and Sex shops that she had in the late 70s”. This eventually led to his collaborating with future Club member George O’ Dowd, then a short-term member of Bow Wow Wow as Lieutenant Lush, later rechristened—and widely known—as Boy George.

“The first record I’d ever bought [was] a record called Private Number by Judy Clay and William Bell, the soul duo.”

Raised in a white upper-middle-class background, Jon listened to everything he could, from burgeoning beat groups, to solo performers like Elton John and Neil Diamond, to Motown singers like Marvin Gaye. His true dose of adventurous music, however, came via an older friend—first through the bluesy chords of Led Zeppelin, and then, much like Jon’s band mate, through reggae.

“I don’t remember how I discovered reggae, but it was at a very early age,” Jon ponders.

“We usually had stuff like bluebeat and ska when we were very young,” a statement with which Mikey agrees.

As Jon continues, he recalls having obtained releases from Trojan Records, a label specializing in island-based music. Older friends would often sneak him into clubs to experience the music live. Said experience, however, proved all the more interesting.

“It’s funny because [the older friends] were actually white racists, but somehow they’d adopted this black reggae music…I was terrified, but the music was fantastic,” he laughs.

“I would go to parts in places of South London which were all black…the only places I can hear reggae. I was only this little white kid; it was the weirdest thing!”

Jon stated that his exposure to ethnically diverse sounds was largely coincidental, which justified his spontaneous recollections. But he was ultimately grateful to have eventually met Mikey.

“It stood me well because I’d met loads of musicians who played all different types of music. If Mikey and I hadn’t done that, we wouldn’t be able to play together.”

“We’d be meeting on the same length leading up to [Culture Club’s musical] direction. We had this amazing kindred spirit understanding musically.”

Mikey replies, “Yeah, I think as soon as we met and started playing, there was something that locked together. We’ve been locked together ever since.”

Jon continues, “Yeah! We had reverse synergy. I’d come from sort of a white rocky background while also being into reggae, Motown, and soul”.

“And I come from a reggae background but also have been influenced by white rock as well,” adds Mikey.

For the two to exhibit such complementary musical tastes, it was not a matter of race, but of location. Mikey was based in Hammersmith, West London and Jon of Wandsworth, South London, both of which are in proximity of one another. Furthermore, unification, as well as spontaneity, became the very essence of Culture Club.

“With Culture Club, Mikey would come up with some amazing bass line…and we would see what would click—things like a reggae bass line with a rock drum, or vice-versa. But we didn’t think about it. It wasn’t like we were planning to make some kind of hybrid music. That’s how the band just happened,” says Jon.

Mikey puts the band’s meeting in summation, “In truth, we’d all come from four corners of London, each of us bringing a different energy to the group. And as Jon said, that’s just how it happened.”

As we were wrapping up, I had asked the two why their music has had such an especial rapport among younger fans, to which Jon responded:

“When we played in LA at the iHeart Festival…half the audience up and down there were 23. They weren’t there because of their parents…they’d just discovered music from the 80s and thought, ‘man, this is great!’ It’s got a freedom about it, and that’s because it wasn’t so machine-based—it’s got a bit of air in it.”

Mikey corrects him, while agreeing to his statement as applied to their music.

“Well, our music was like that. See, a lot of music from the 80s was machine-based. But I think the reason why our music is so timeless is because, as Jon said, it’s got a lot of air in it. On ‘Do You Really Want to Hurt Me,’ for example, on the multi-track, we had room to put down 24 channels, but we only used 12 tracks!” As he gives this explanation, Jon laughs heartily.

“There’s a lot of air around it,” reiterates Mikey. “In the 80s, everyone would be filling up the whole 24 channels, but we used 12…the rest is just space, and that’s what gives it its magic I think.”

For my final question, I had asked how the band is generally faring on tour.

“The tour is great!” exclaims Jon.

Mikey adds, “It’s fantastic, and you’ll see when you come to the show that there’s a great energy coming off the stage. I think you’re gonna love it because we’re basically real people playing real music (“YEAH!” Jon interjects). There are no machines.”

I come from a family who is passionate about all things music. I learned to sing at an early age, and by 13, had my very own Fender Strat guitar. I tried my hardest at learning all that I could. Because I was born with cerebral palsy, I had to teach myself an adaptive playing style. I learned to write and record my own music, despite these difficulties. In college, I started making great use of my writing abilities by reviewing music, as well as copy editing. I guess it's best to stick with what you know, while welcoming a fair challenge at the same time.
Previous Interview: I SEE STARS
Next Interview: CANE HILL