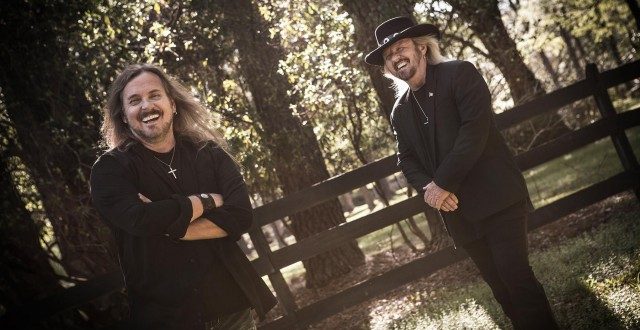 Loud & Proud Records will release Red White & Blue (Live) tomorrow, July 1.   The album is a recently unearthed live Van Zant show recorded on January 28, 2006 at Wild Adventures Theme Park in Valdosta, Georgia and is the only concert recording in existence from the only tour by brothers Johnny (Lynyrd Skynyrd) and Donnie (38 Special).

“We are really excited for this album to come out right before the Fourth of July, to celebrate the independence of our country,” says the Van Zant brothers. “We hope everyone rocks out to RED WHITE and BLUE all day!”

Red White & Blue (Live) is available for purchase through Amazon and iTunes while the webstore is offering an exclusive bundle with CD.  Late patriarch Lacy Van Zant, father of brothers Ronnie, Donnie and Johnny, compiled family photographs and memories and put together The Van Zant Family Southern Music Scrap Book. Lacy said, “I have written this book for you, the fans.” The book chronicles the family history, with 200 photographs of family members and memories. Each book is personally autographed by Johnny and Donnie Van Zant.  Purchase it HERE.

Red White & Blue (Live) opens with the crowd-pleasing “Takin’ Up Space,” and includes their 2005 hit “Help Somebody,” which reached #7 on the Country Singles chart. The brothers also perform fan-favorite versions of 38 Special’s“Wild Eyed Southern Boys,” which Johnny sings for the first time, as well as Lynyrd Skynyrd’s “Call Me the Breeze” and “Sweet Home Alabama.”

One of the most telling lines is from the title track, “Red White & Blue,” a song the Van Zants wrote which first appeared on Lynyrd Skynyrd’s 2003 albumVicious Cycle is, “We’re trying to sing the truth to you.” That line alone encapsulates exactly why the Van Zants have always had such a deep connection with their audiences. But Red White & Blue (Live) may have been lost if it hadn’t been for the man known as “LJ,” Donnie’s longtime 38 Special bandmate, bassist Larry Junstrom. LJ had just bought some mobile recording equipment and asked permission to record the show with his then-new Pro Tools rig. He recorded the concert and then some months later called Donnie and urged him to listen to what he captured.  Donnie knew it was a good show, but he couldn’t believe how good. The plan was always to release it, but somehow the recording was forgotten about until recently. After fans had been repeatedly asking for another Van Zant project, LJ reminded the brothers of the live concert’s existence.  “The plan was always to enjoy ourselves and have fun,” says Donnie, “and this recording captures a moment when we had a great night.”

The brothers joined together over twenty years ago to form Van Zant and have delved deep into the family’s country-tinged roots. The two were inspired by the fact that their late brother, Ronnie, the spiritual leader and original lead vocalist and chief songwriter for Lynyrd Skynyrd, had always wanted to do a country record. “Let’s do it for Ronnie,” avowed the brothers. The Van Zant’s significant contribution to southern rock, country and popular music across the board has created an unparalleled legacy and is the reason they have been dubbed The First Family of Southern Rock. “It has been quite a while since Donnie and I have worked together on a project,” says Johnny Van Zant. “We can’t wait to see what the fans think. We love it, so we hope they do too.”