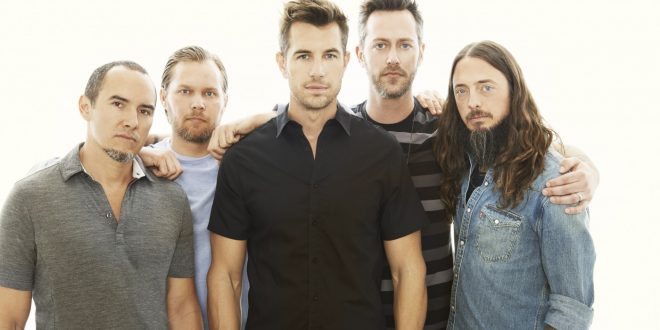 Multi-platinum rock band 311 is hitting the road this summer for a 7 week headlining tour of North America with special guest Matisyahu providing support on most dates. The tour kicks off tonight, June 29th in Salt Lake City and will run through August.

Highlights include a special 4th of July weekend concert event at Las Vegas’ Mandalay Bay Beach where the band will play two special shows with fireworks overhead on both nights (July 2 & 3). In addition, 311 will make headline appearances at several festivals and radio events.

311 are currently writing and recording their 12th studio album for projected release in early 2017.

In celebration of the band’s 25th year anniversary, 311 released their box set ARCHIVE (June 2015), featuring 4 CDs. 81 tracks of b-sides, bonus tracks, pre-production recordings and demos from 1992-2014. Plus a 60 Page Book of rare photos and memorabilia.

Their latest studio album STEREOLITHIC (March 2015), debuted at #6, marking the the band’s 9th consecutive album to debut in the top 10 on Billboard’s Top 200 Album Chart. The album also entered No. 1 on both the Rock and Indie Charts.

On their upcoming summer tour, fans can expect an electrifying mix of tracks spanning the band’s 25 years. Check out the tour dates below.

311 mix rock, rap, reggae and funk into their own unique sound. After years of touring, 311 have developed a reputation as one of the most entertaining & dynamic live bands in the U.S.

311 have released eleven studio albums, one live album, one greatest hits album and three dvd’s – and have sold over 9 million copies in the U.S. Their last nine albums reached the Top 10 on Billboard’s Top 200 Sales Chart…and nine of their singles have reached the Top 10 on Billboard’s Alternative Rock Radio Chart (including the #1 singles Down, Love Song & Don’t Tread On Me – along with Amber, All Mixed Up, Come Original, Creatures For Awhile, Hey You and Sunset in July).

Besides their normal tour dates, the band has made a major splash with their special event shows…311 Day & the 311 Caribbean Cruise.  Every other year, 311 plays an arena show on March 11th (“311 DAY”) – that attracts 311’s biggest fans from around the world.  Billed as “the ultimate 311 concert experience,” the show includes an extended setlist of hits, rarities and covers; backed by state-of-the-art lighting and special effects. 311 Day typically attracts over 10,000 fans (from all 50 U.S. States and 15+ countries) – and March 11th is now considered a holiday to 311 fans around the globe.