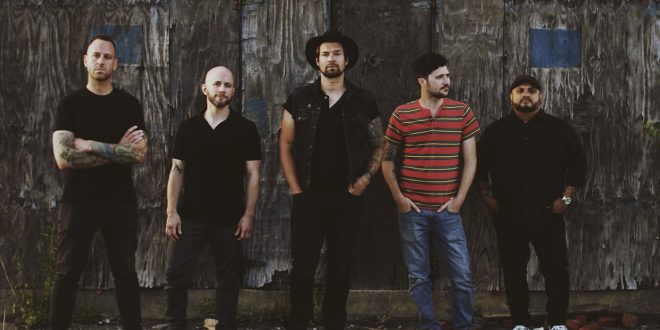 “Throughout each song on the record, there are a lot of references to water,”TAKING BACK SUNDAY vocalist Adam Lazzara tells Entertainment Weekly who broke the news about their seventh studio album TIDAL WAVE, set for release on September 16, 2016 via Hopeless Records . The song from which the album takes its name is released today and is available as an instant grat with the pre-order. Its video – a pastiche of live performance footage of the song from this Summer’s ongoing Taste of Chaos tour, is released today.

“I’m very excited for people to hear it,” guitarist John Nolan told hometown newspaper New York Newsday. “I think it’s going to be a surprise to some people. We’re all extremely excited about what we’ve done. It’s the culmination of things we’ve tried over the past two records. I think it’s the strongest record we’ve done since getting back together. We’ve freed ourselves up to go in new directions.”

The classic punk aesthetic of the title track thrusts Taking Back Sunday into a different world of songwriters. Lazzara told Entertainment Weekly, “With our first records, we were writing from the perspective of 17, 18-year-old kids and now it’s like, as you grow old, the blinders get pulled back and you have a different way of looking at the world. There’s more of an Americana feel. But we realize anything we do is going to sound like Taking Back Sunday.”

Released today in video form, “Tidal Wave” will be included as an instant grat track with the pre-order here. Physical and vinyl pre-orders can be purchased here. The song can also be heard on Spotify.

Their first new album since Happiness Is in 2014, Tidal Wave is a forceful and fluidly cohesive tsunami of a record. Kicking off with “Death Wolf” whose one-minute atmospheric intro explodes at breakneck speed fueled by Mark O’Connell’s muscular drumming, the album pushes the band’s musical boundaries, challenging them into experimenting with different textures and sounds while remaining very true to their trademark sound. From the anthemic “You Can’t Look Back” to the balladic “I Felt It Too” to the mid-tempo closer “I’ll Find A Way to Make It What You Want”, Tidal Wave is a genuine evolution for the platinum-selling band. “I couldn’t put any more of myself into these new songs and we’ve grown as musicians,” Lazzara says about how they’ve continued to innovate and expand with each progressive record.

Currently halfway through the 37-city Taste of Chaos tour with Dashboard Confessional, Saosin, The Early November (with a rotating cast of guests like Motion City Soundtrack and Saves The Day among others), Taking Back Sunday formed on Long Island in 1999, and has sold millions of records, landed a pair of Top Five Billboard chart positions and evolved from a youthful punk outfit to a vigorous and inventive pack of seasoned musicians.

How have Taking Back Sunday managed to not only survive but thrive throughout their prolific career? The answer is simple: by constantly innovating. That fact is especially evident on the group’s seventh full-length Tidal Wave, which sees these Long Island legends continuing to take chances and plunge headfirst in the sonic unknown with dazzling – and remarkably catchy – results.