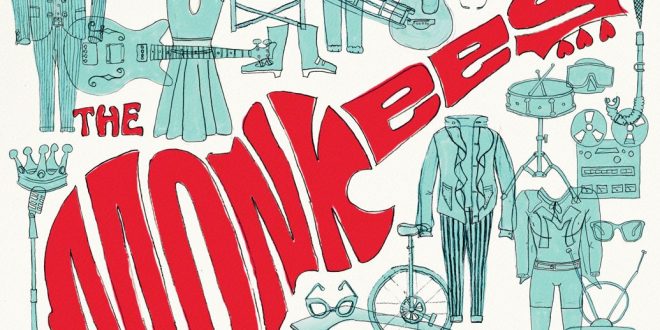 The Monkees are back in full force on their latest studio album Good Times to celebrate the bands 50th anniversary. It includes everything from brand new songs written by some of today’s modern rock heroes, as well as tunes written by members of The Monkees themselves.

“You Bring the Summer” written by Andy Partridge is one of those upbeat feel good songs which could very well be the anthem for summer 2016. It has a light and airy melody and is extremely catchy. Micky Dolenz brings an enthusiastic energy to the track which is basically an ode to a girl who even on the darkest days can make it feel like summer. The lyrics are very visual: “summer from your golden smiles/that paint the snow drops pinky rose” and have a very sunny feel to them. There are hand claps dispersed throughout the track giving it a throwback vibe and a fade out chanting which evokes The Beach Boys. It’s one of the highlights of the album, and certainly the track to crank up on the way to the beach.

The piano driven “I Know What I Know,” penned by Michael Nesmith, is simple and simply beautiful. Nesmith sings about a person whom he feels, sees, and, knows nothing without them. It’s a love song that has been done a million and one times but Nesmith brings a sense of vulnerability and purity to the tune that is unmatched. It’s as much a love story as it is a song about being alone as Nesmith sings “someone alone always dreams of the perfect one/someone in love,” and one can’t help but feel a little bit emotional. The string instrumental in the middle of the song that echoes the melody is the perfect addition to the song, exaggerating the internalized feelings even more making it one track not to be missed.

“She Makes Me Laugh” is the leading single off the album, written by Weezer frontman Rivers Cuomo, and no other modern songwriter captures the essence of 60’s era Monkees like Cuomo does. Right from the first few seconds the song already hooks listeners with its sweet and infectious melody. It sounds like a song that could have been released back in The Monkees heyday yet it still retains modernity to it. Dolenz takes over the lead vocals and brings just the right amount of pep that a tune like this calls for. The lyrics are full of innocent love “she’s fine as any valentine” Dolenz mentions and goes on to point other activities they do together like having dinner dates and going on safaris. The lyrics, though simple, are exactly what works for The Monkees. Though some could argue that the band are trying to recapture their youth with this track, it is executed with such ease and sincerity that is hard to fault the band or Cuomo for playing into what The Monkees do so well. In fact, it is the best uptempo tune on the LP.

However the hands down best overall track is Ben Gibbard from Death Cab for Cutie’s penned song “Me and Magdalena.” This is the most modern and relevant song on the album, a gorgeous haunting ballad that carries some weight to it. And while one can hear the Death Cab influence, after experiencing the tune through Nesmith and Dolenz’s vocal stylings it would be hard to imagine anyone else singing the track. Nesmith takes the lead here with Dolenz backing him up on harmonies, and those harmonies are quite breathtaking when put together with lyrics like “I don’t know if I’ve ever loved any other/half as much as I do in this light she’s under.” It’s the type of song that comes across as effortless on all accounts and one that listeners will want to put on a loop, creating a trance like state. Not only is it the ultimate highlight of Good Times but it is in this reviewers opinion the best song of 2016.

Not to be forgotten Peter Tork contributes his own country song “Little Girl” which allows him to showcase his talents and not be outshined by other members of the band. And the late Davy Jones appears on the rereleased Neil Diamond song “Love to Love” rounding out the album.

Good Times feels fresh and new and The Monkees sound revitalized ready to conquer the world once again. After a long time absence, with the amount of joy this album brings it was well worth the wait.