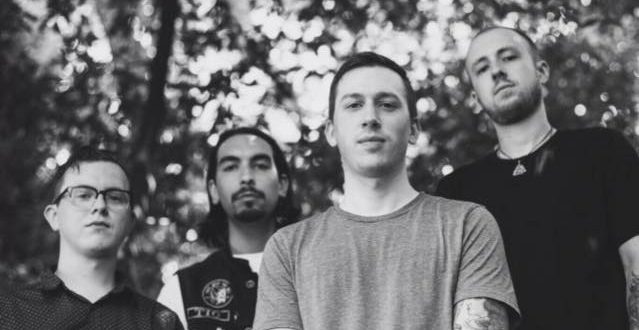 It’s not often that a new band is able to mix elements of alternative, punk, and metal into a sound that is not only cohesive, but also has potential. Play it too soft, and you’re removing yourself from the rock genre entirely (while still somehow being too “hard” to fit into the pop world). And play it too hard and you risk losing musical accessibility, instead becoming an obscure subgenre within one of an already overwhelming number of classifications.

It’s a tough role to fill, but when done well, the result can be gratifying. Take Atlanta’s Big Jesus as an example. Wanting to blend backgrounds and musical tastes, the quartet owns a sound that fuses the charisma of Silversun Pickups with the playful aggression of early 2000’s rock. Starting as a side project of CJ Ridings (guitarist and founder), Big Jesus has been booking slots on tours both in and outside the country leading up to their second release, Oneiric this fall.

Music Existence was recently able to connect with Ridings to discuss blending musical genres, the Atlanta music scene, and more.

ME: To start off, when will Oneiric be released?

Ridings: We actually just completed everything [a couple of weeks ago], so it’s going to be some time in the fall. There’s not a set date. We’re sending in for a bunch of tours, so we’re trying to time everything right.

ME: What can you tell me about the music on Oneiric? Will it be different from One?

Ridings: There are four songs from One that actually ended up being remixed, and they’ll be on Oneiric. I think the newer songs we’ve done are a little more mature. A lot of the songs on One had a rotating lineup, because we weren’t a solidified project yet, but now we’ve hit our stride.

ME: How did you select which songs to remix?

Ridings: We ended up getting all of them remixed, so we had 15 songs that we were trying to cut down to 10. We made a bunch of different track listings, gave them to each other, and saw which songs fit together the best. It was a big undertaking to try to figure out how to blend the old with the new. We mainly picked ones from the old record that filled the gaps with the new ones the best.

ME: I can only imagine listening to different playlists of your own songs.

Ridings: Yeah. Laughs It was kind of a test, and it felt awesome when we finally hit the track listing we ended up with. Luckily, I have friends here and a lot of mentors in bigger bands that we were able to ask, “What do you think about this?” The listing I thought was good ended up being the track list we chose, so it’s like you kind of know what feels right.

Ridings: We usually start with bringing a riff to the table. We all come from metal, punk, and hardcore backgrounds, and with those bands, lyrics are always the last thing to be added.

So we’ll start with a riff, and then we’ll make a really bad demo and bring it to practice to show everybody. That’ll be our initial idea, and then we’ll just play together and see what happens. Afterwards, we’ll make an instrumental demo, lay down some gibberish melodies on top of that, and then add the words.

ME: I know you just mentioned everyone coming from a different background. Do you think that impacts the Big Jesus sound? Do you have any specific musical influences?

Ridings: It’s a huge part. We all have a very big, eclectic taste in music from the softest, chilliest stuff like the Beach Boys’ Pet Sounds to the heaviest metal stuff like Slayer, and all that’s in-between. With this project, we wanted to make heavy music with riffs that were accessible for people who aren’t necessarily into metal and people who love metal would still listen to without thinking we’re a mainstream pop band. We’re all trying to find the balance in [those two ideas].

ME: I read that you were the one behind pulling the band together. Where did the idea for the project come from, and how did you include everyone?

Ridings: It’s kind of funny. I tried to be in bands for a long time, decided that being in a band was hard as a career path, and wanted to become an audio engineer. I got an internship at a big studio here and started pursuing that goal, but I missed being in a band. I just wanted to make something and put it online.

I don’t have that many friends who can actually sing, so Spencer [Ussery (vocalist)] was my first thought. He’s someone that I’ve always known, but we had never played together. I’d never done something vocally [like this project], and I guess I wanted to make [something different] as my tastes changed from my teens and early twenties. I slowly drifted away from metal and punk and wanted to listen to things that were more musical. We all wanted to make something we wanted to hear, I suppose.

ME: I hit that same change in music tastes in my early twenties.

Ridings: Yeah! I got into all these classic bands like way, way later than anybody else. I was 23 or 24 when I was like, “Man, The Beatles are amazing. Led Zeppelin is amazing.”

ME: You’ve been part of different bands throughout Atlanta. What would you say makes Big Jesus different from other projects you’ve been involved in?

Ridings: The music scene in Atlanta is a little weird in that there’s not a sound to it. It’s more a clique of musicians who hang out with each other. Every band in Atlanta is original in respect to one another. I would say Big Jesus is like the past bands I’ve been in getting toward a more accessible place. We include songs that have a verse, chorus, verse, chorus sort of format.

ME: How large is the Atlanta music scene?

Ridings: I saw a VH1 article that said Atlanta was the most metal city in the US. I don’t know if it’s true, but there are a lot of metal fans here—especially for stoner metal and nu metal.

Then there are actually two different things. There are actual metal bands, and there is a different scene of hardcore bands that do their own thing. The groups are relatively small, but they’re tight knit. If someone from that genre plays a show, every kid is going to come out to support the genre.

ME: How did you become involved with the scene? What drove you to becoming a musician?

Ridings: I guess it was watching MTV as an elementary school and middle school kid, and seeing bands like Blink-182 and bands that were making music that was funny and having a good time. I was like, “I want to do that. That seems awesome.” So in middle school, I picked up the guitar and grouped up with the other kids that had the same idea.

ME: What do you think of what MTV has turned into versus the shows it aired back then, like TRL?

Ridings: I haven’t watched it in a couple of years. I mean, the last time I saw, it had a bunch of stuff like “Teen Mom,” reality shows, and all of that. Honestly, that stuff is entertaining, but it was supposed to be a music channel. Now, it’s kind of a young demographic channel more than music.

ME: It’s kind of sad to think about.

Ridings: Now you can listen to any song you want to on the Internet. But I remember coming home, getting off the school bus, and watching all of the countdown stuff. It was the only time I could listen to those songs unless I bought the CD. That’s just not a thing that happens anymore, and I can see why people aren’t still doing these shows. It’s just the battle of having everything at your fingertips all the time now.

ME: I read that your gear was stolen earlier this year. Has it been found or how do you go about recouping it? It seems like a really big loss.

Ridings: We got our van back. The trailer was never found, but the local radio station threw a benefit for us, and we also had a GoFundMe page that helped us break even with the amount it took to repair the van, get a new trailer, and replace the essentials of the gear that I lost. I hate to say it, but it almost ended up working out for us in the end. We got so much back and were shown so much support. It’s something you can never really gauge until something like this happens. The amount that Atlanta helped us out really made us proud to be from here.

ME: My next question then is about how you go about naming things. I’m thinking of your newest track, “SP,” Oneiric, and the name Big Jesus itself.

Ridings: Ok! So “SP “is from this HBO documentary I just watched, Going Clear. Have you seen that?

For Oneiric, we thematically have a lot of dreamy stuff. A lot of the time when Spencer and I are writing lyrics, we’ll have a thesaurus open to find cool words to throw in. Oneric is a word we both found and were like, “Oh, that’s perfect.” [We initially] came up with Oneirica to make the word a girl’s name for a song about dreaming about a girl. Then after looking at the lyrics and the final track listing, oneiric seemed to fit for the album. It’s also a unique word.

The band name is totally random. Like I said, when we first started, we were never supposed to be a serious project. We were just going to record some songs and put them online. We were never going to choose a name, and I seriously just said [Big Jesus] one day at practice to make Spencer laugh. We all thought it was funny and stuck with it. [Eventually,] we thought we should change our name to something a little more serious and deeper to get a record deal, to get management, and play these shows. Now, it’s like it’s too late. We’re stuck with it.

But I think there’s some good to it. Who knows if the scouts from the record label would have ever checked us out if they hadn’t wondered, “What is that ridiculous band name? I have to listen to this song to see what it’s all about.” Maybe it worked out for us, but honestly, we’re not the biggest fans of the name.

ME: Speaking of tours, I saw that you also booked the Aftershock Festival, and you have a couple other tour dates getting lined up. Where are you the most excited to play, whether it’s something already booked or a future dream?

Ridings: I can die happy with what I did with music if I can play a show in Japan, and we have some UK dates in the works, too. I’ve never been outside of the country so anywhere international is exciting.

ME: Last question, but do you have any last words for fans or new listeners?

Ridings: Oh, we don’t have any fans yet!

ME: I mean, it looks like you have a bit of a following. Laughs.

Ridings: Laughs. For future fans, if you’re listening, thank you. We love everybody that supports us and takes the time to listen.

Want to know more about Big Jesus? Check them out at the following links: