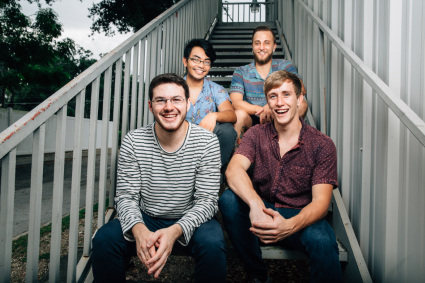 Summertime is now officially in full swing. Every now and then, a piece of music comes around and opportunely fits that particular solstice. Finding summer-based music is far from difficult. There are many releases that represent summer from a lyrical standpoint, or are eponymously named. However, when listeners seek something of a subtler variety, it’s really down to a matter of luck.

With luck at my side, I eventually gravitated toward Pet Names, the new EP by Orlando quartet, Pathos, Pathos. I had originally overlooked this release, provided I receive more material in my inbox than can keep track, but in some way, I’m glad to have checked it out at this time. Its crafty sunshine guitar pop is ideal for those warmer days with a tinge of breeze. In any style, each of the EP’s five tracks contains slightly overdriven riff grooves and a vibrant drum pace. Matt Walsh’s tangy chorus-laden vocals are equally fitting to the instrumentation, making the presentation all the more likable and hanging very well together as a whole.

In my experience figuring out what makes a song draw me in, I’d usually focus primarily on its stylistic aspects. Sure, it’s my fixing of alternative pop I can get into easily, but what makes the album especially stand out is the subject matter of the lyrics. Beneath the courageous positivity of the songs are relatable accounts of boys and girls going through almost cyclical motions of bliss and strain. Taking after the band’s debut album, Familiar Homes, the EP begins with “Back at the Start”. The track follows its subject, who lay alone at a resting spot and wants to find it in themselves to continue forward. Right from the title of the song as well as its climbing rhythm guitars, I had immediately envisioned the person trying to piece their life back together in a complete daze of hesitance. Once the song picks up at the 1:06 mark, they seem to be ignited by a surge of hope in reconciling with their lover, but find themselves second guessing their impulses. At the same time, they are conflicted whether they should express their love—by material lure—to woo their ex-partner, or to simply boast a false self-confidence. The pacing on the song picks up yet again, this time with sort of a pop punk edge, highlighting all the kinks in the relationship that are missed sorely, then returning to a driving mid tempo to repeat the chorus. The lines “So crawl/Falling backwards in the sidewalks/Feeling small” represent the extent of the impact, going from having some semblance of security to being left empty handed with nothing but shame. The song then returns to the climbing verse riff, supplemented by a twee solo and well-blended horn section to smooth out the pain. Up next is the titular track, “Pet Names,” which emphasizes a relationship that has progressed far beyond initial limerence. Comfortableness between the couple has all but diminished, to the point where conflict is the norm. What I gathered from the line “You’re always shouting my name until you have to call” is that while things between the two seemed cute and tender on the surface, the vibe changes as soon as they converse with an acquaintance out of their partner’s comfort zone. It seems as though the pet names are the lone thread that keeps their relationship strangely functional. Though what appears to be a courteous and sincere effort in rekindling a flame is, in actuality, a bleak hashing out of what’s to be generically expected in a relationship.

Similarly, the third track, “Always in Love,” expounds on that spike of false hope. Its rhythm pays homage to the doo wop standard “Earth Angel,” accompanied by a gliding, reverberated solo. This song centers on the subject being newly—and very much detrimentally—open to receiving the warmth and affection of the other, while being blinded by their own bliss. An outpouring of confidence is felt in the chorus, which talks about spoiling the other with the motive of winning their heart. Another tactic explored is manipulation. That is, in the song’s context, acting in stark contrast to what is considered desirable behavior in a mate, only to guilt trip their way back. The victim’s feelings are then rationalized on the penultimate track, “Devil,” where they find themselves seeing past their partner’s emotionally abusive ways. Even though this song exhibits a similar dynamic of the others, it feels more serious in its execution, having finally established the sense of being held back. By the final track, Summer Nights, a newfound sense of contentment is realized, upon finding out their partner’s truly passive and cunning ways in the relationship. Greater brightness is integrated into the guitars, allowing for the full extent of melody to be heard. The song is genuinely more upbeat, with a sobering confidence and a more playful attitude, ultimately celebrating the reward of having accepted a hard life lesson.

Overall, Pet Names is a true gem that shines perspective on a relationship gone awry. It smartly centers on an illusory correlation between necessity and desire of another person’s affections, eventually recognizing that self-love is what’s most important. In good time, more listeners will have gained a relatable interpretation, as well as sufficient insight, into the goings on of a cunning force masquerading as love.

I come from a family who is passionate about all things music. I learned to sing at an early age, and by 13, had my very own Fender Strat guitar. I tried my hardest at learning all that I could. Because I was born with cerebral palsy, I had to teach myself an adaptive playing style. I learned to write and record my own music, despite these difficulties. In college, I started making great use of my writing abilities by reviewing music, as well as copy editing. I guess it's best to stick with what you know, while welcoming a fair challenge at the same time.
Previous Gallery: Atreyu at Nova Rock 2016, Austria 10/6/2016
Next Gallery: Blue October at The Pageant in St. Louis, MO on 6.25.16