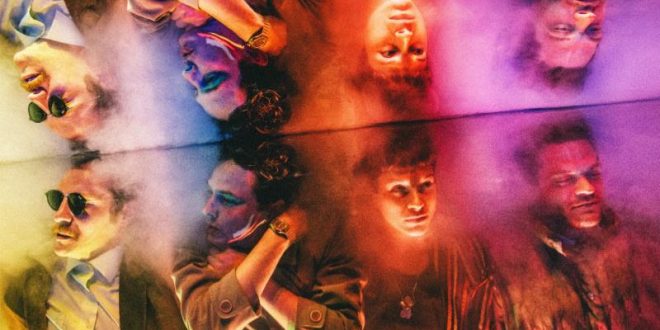 BRONCHO’S album Double Vanity has dropped just in time for the summer and while it may not jump out right away as the soundtrack to your summer days, with its hazy vocals and retro influences it is sure to grow on listeners and accompany them on their summer adventures.

The LP starts off very strong with “All Time” which has a dreamy pop feel with dark undertones with the help of a deep electric guitar sound. It’s an explosive way to let listeners know that BRONCHO’S are still on top of their game and are ready to serve up a record that will leave a lasting impression in listeners minds. When the lead singer wails that he’d rather be alone, one can really feel the emotion in his voice. It’s hypnotic and an absolute pleasure to the ears sailing along at its own speed.

Next up is “Fantasy Boys” which has an 80s British new wave feel that is entirely welcomed and ready to be consumed by listeners. The chorus is about the most infectious thing one will find on the album, and will most likely get stuck in ones head long after the first listen is over. It is the perfect mood music which is exactly what BRONCHO does best. It doesn’t matter that for the majority of the album it is almost impossible to make out what the lyrics are, the songs are just that good in its production and execution. If there’s one track on the entire LP that should be getting tons of radio airplay this is it.

“Two Step” which appears near the end of the album also has a retro vibe, but it’s a mixture of 80s and 60s as it borrows some of its melody, intentional or not, from The Cavaliers “Last Kiss.” It’s not something every listener will be able to pick up on, but once you’ve heard the similarities, albeit brief, it’s hard to unhear it. But it’s this mashing up of decades of sounds to create a new sound that make this song one of the most unique tracks on the LP. It is incredibly infectious and still retains the chill vibe that BRONCHO deliver so well to their audience. It feels fresh and new but also comfortable at the same time and one has to give props to the band for upping their game with “Two Step.”

Arguably the best song on the entire record is “Soak Up The Sun” which just sends BRONCHO up another level in their musicianship. It’s once again the type of song that one just needs to close their eyes while listening to and let the music sweep them away with its mesmerizing melody and vocal performance. There’s something about the layering of the vocal tracks here that are otherworldly and have the ability to make listeners swoon with delight, hearts in their eyes. Coming after some more 50s inspired tracks, “Soak Up the Sun” reminds listeners just what the band does best, and how they accomplish it with such ease.

The entire album is fantastic to start to finish and while it is not the most cohesive LP, there are two distinct different sounds BRONCHO are putting forth (80s chill wave and 50’s rock pop retro) each song on their own are masterpieces in their own way. At times it does feel like one is listening to two different albums but if one takes a step back from the big picture and enjoy each song on its own for what it is, Double Vanity comes close to a near perfect work of art.