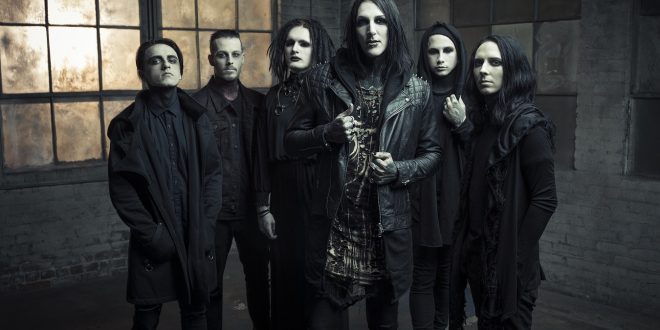 Roadrunner Records has announced Motionless In White as the newest members of its illustrious roster. The Scranton, PA-based band will celebrate with the release of their label debut single, “570.” The track arrives today on all DSPs and is streaming now on the band’s official YouTube Channel.

Motionless In White commented on the Roadrunner family stating, “We are very honored to finally announce that we have signed with Roadrunner Records. Over the past few months, we’ve had the privilege of getting to know the hard working team that makes up Roadrunner, and felt a connection with their company immediately. It has been a dream of MIW for years to someday sign with their label, and we are elated to find that it is a perfect home for the band to continue building our career. We are very excited to start this new chapter and to keep working hard every day with Roadrunner by our side. Thank you to Roadrunner Records for opening your home to us, and thank you to all of the fans that have supported our band tirelessly over the years. Your support and contributions have helped lead to all of these amazing developments taking place for our band. We’re looking forward to many more years of this with all of you.”

Motionless In White is currently hard at work on their long awaited fourth studio album and full-length Roadrunner debut, slated for 2017. “570” marks the band’s first new release since 2014’s chart-topping “REINCARNATE,” which debuted at #1 on Billboard’s “Top Rock Albums” chart as well as at #9 on the overall SoundScan/Billboard 200. Motionless In White’s third studio album was highlighted by the blockbuster title track, a top 20 Active Rock radio favorite accompanied by a striking companion video now boasting close to 10 million individual views.

Motionless In White will celebrate “570” with nearly non-stop touring, kicking off with this year’s Vans Warped Tour ’16 Presented By Journeys. The dates – which see the band topping the new Monster Energy Party Zone – begin June 24th at Dallas, TX’s Gexa Energy Pavilion and then continue through mid-August (see attached itinerary). From there, Motionless in White will join forces with Korn and Breaking Benjamin on the eagerly awaited Nocturnal Underground Tour. The trek – also featuring Silver Snakes – gets underway September 27th at Cedar Rapids, IA’s US Cellular Center and then runs through mid-October. As if that weren’t enough, Motionless In White will be among the stars performing at a number of upcoming heavy music festivals, including Chester, PA’s Monster Energy Rock Allegiance (September 17th), Louisville, KY’s Louder Than Life (October 1st), and Sacramento, CA’s Monster Energy Aftershock (October 22nd). For complete details and remaining ticket information, please visit http://www.motionlessinwhite.net/#tourdates.

Founded in 2005, Motionless In White have won over audiences worldwide with their aggressive music and arresting imagery.  The band – currently comprising lead singer Chris Motionless, guitarists Ryan Sitkowski and Ricky Horror, keyboardist Josh Balz, bassist Devin “Ghost” Sola, and drummer Vinny Mauro – have proven a ferocious and inventive live act, earning an increasingly fervent fan following via countless headline shows, festival sets, and tours alongside such iconic acts as Slipknot, Lamb of God, and A Day To Remember among others.

Previous Whitechapel launches new video for “Elitist Ones”; releases new album, ‘Mark of the Blade’, today worldwide; kicks off Warped Tour dates
Next The Lowest Pair – Uncertain as It Is Uneven