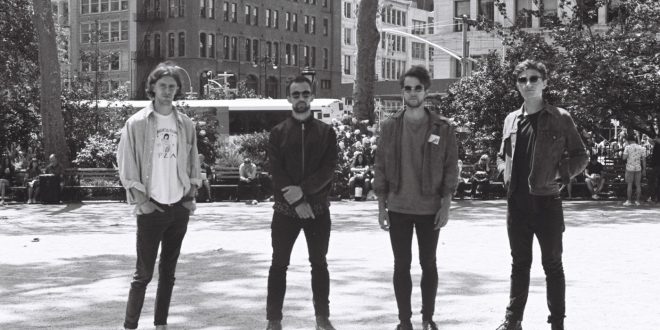 Music Existence: How you guys meet individually and form ROMES?

Nick: Jake and I are brothers, born and raised in Toronto. When we were young, we moved to Ireland with our family. There is where we met the two Irish guys (Andrew and James) in school. We have been playing music together for years and years now. We all realized we had a real chemistry and bond as the four of us so we started ROMES. But we have been friends for ten to fifteen years now, half our lives.

Music Existence: That’s a long time. How does the long lasting friendship impact and help ROMES?

Nick: There are definitely certain aspects we see on a daily basis the benefits of it especially since we live together. We know the ins and outs of each other. Because we have grown up as such good friends for so long, our musical tastes and influences are also very similar so when it comes to writing our music its a very cohensive product and we are all striving towards the same thing with the music. it’s very effortless at the end of the day.

Jacob: I think because the people that you work with are like our brothers to me as oppose to just having musicians that play the music, it definitely makes it more enjoyable to work with your best friends.

Andrew: Yeah, I think it’s really easy and the personality aspect is massive but we are also on the same wavelength creatively like me as the bassist and Nick whose the drummer, there are times where I know exactly whats he is going to do before he does it. Those things make the writing process much easier and more fun. It’s pretty awesome.

Nick: We basically can read each other’s mind at this point is what he’s saying.

Music Existence: Magical powers you have I see.

Music Existence: Would you say ROMES has a certain aesthetic?

Andrew: In terms of how we dress, i THINK ITS JUST US. In general, we just with our gut and what’s right for us.

Jacob: In terms of visuals, I think we have a very sharp aesthetic in mind we go towards. Our art is of course intentional, we want to come across a certain way. We want it to represent our music.

Music Existence: Your visuals are mostly in black and white, very stripped down, raw and simple. Love the album art as well.

Nick: Thank you! For the EP, we worked with very closely with our friend Devin back in Toronto. He came up with the art work for the EP and we based some of the visual aesthetic around that with the cropped heads and the B&W. It’s simple and effective and that’s what we go for.

Music Existence: Last summer, you spent time in LA recording and creating the EP. Can you tell us abut how it all went?

Jacob: We had been working on these songs for a couple of years and it was just awesome that a guy as amazing as Tony Hoffer and acts he’s worked with in the past was very interested in working with us and we were able to create with him in the studio. There was such a great chemistry and was overall an awesome experience.

Andrew: It kind of changed, for me personally, how I approach our art because Tony’s attitude was very if it feels good even from the first time just leave it and go on. And since then we have taken that approach it with our music and artwork. Never complicating things was my big take away from working with Tony.

Nick: Plus, being in LA working in the summertime was pretty cool.

Music Existence: Thats the best time to be there, so much going on and the weather is beautiful.

Nick: Yeah, it was pretty amazing seven weeks we spent there. We stayed in Echo Park. And then the weekends, we had free to keep working on music, hit up Venice Beach and Santa Monica a couple times. Yeah, it was good.

James: It was great experience because we have played shows before in LA but never actually stayed there. For us Irish folks, it was quite a change in climate too.

Music Existence: A favorite things to do when playing shows and traveling at the same time?

Nick: When touring you’re kind of just in and out but if there’s some time just exploring and walking around the city is best.

Andrew: Really depends on where but mostly the city’s museums, parks, and just exploring about.

Jacob: There was this time here in New York where we had off and three of us made this big plan to go see all the major sights like Central Park and the typical touristy things. And literally five minutes after leaving our hotel, we stumbled into a bar and ended up staying there for five hours. Plans change and sometimes thats what our days off are.

Music Existence: Back to the music and EP. What’s your favorite or most proud of track on the EP?

Jacob: I’d say our most recent single, Believe, is my favorite. I think it just means a lot to all of us. It was written during a time where people around us were doubting our choices and ultimate dream which was continuing to do this band. We just wanted to stand up for yourselves and the way to do that for us was to write a song. So it definitely has a special place in our hearts and my favorite song on the EP.

Andrew, James, and Nick: Spot on.

Andrew: I’d say Believe as well. We’ve all been in previous bands and things keep going off or wrong. However, we never thought about quitting so all of this was perfect timing. But the songs were written a while ago and your mood and perspectives are always changing when we recorded them with Tony then playing them live. I’d say Believe is my favorite because of how significant it was in that point in time it was created but now the meanings of the songs are always changing depending on the context.

James: Tryne Be and Spend the Night. I like the more sexual vibes.

James: I just like the sexy vibes and grooves. Gets you up and dancing and thats a big part of who we are as band. Anyways, thats me for today.

Music Existence: Going back to who you are as a band. Is there something in particular you want fans and listeners to get from your music?

Jacob: More just being able to share our music with large audiences. We are just grateful to be able to do that. So any chance we get to release and play music the best music we can possibly make and get it to the public and its received well thats the best thing ever. There’s no real message if its good music its good music.

Nick: Any sort of emotional connection and depth, thats the ultimate goal.

Andrew: It’s also as simple as a group of friends putting on the EP before going out or going to a gig. That’s just as cool as something super powerful. Just as along people connect with it and share it, I think thats the best feeling ever.

Music Existence: To wrap things up, a last quick quirk question. Favorite day of the week and why?

Nick: Monday because it’s today and you have to seize the day and it’s the present.