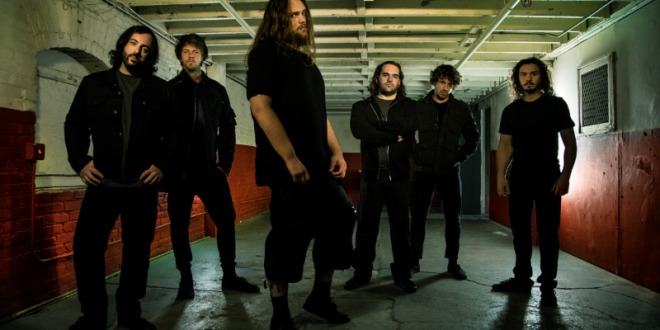 Solidifying their position as a band to watch in 2016, rising progressive metal band ONI saw their breakout moment earlier this year with the release of their blistering new track “Eternal Recurrence”. Showcasing the band’s ability to meld chaotic progressive time signatures with blazing solos and heavy grooves (with the unique inclusion of “xylo-synth”), “Eternal Recurrence” soars as the band’s first of several planned singles cut from their upcoming full-length album, Ironshore, scheduled to hit stores this fall.

Today marks the release of the band’s new music video for “Eternal Recurrence”. Directed by Abraham Roofeh and filmed in vocalist Jake Oni’s home locale of the Cayman Islands, the video depicts a man running from a mysterious masked assailant – but is this assailant really a stranger?

ONI frontman Jake Oni states, “It was a pleasure filming the video in the Cayman Islands. It’s very convenient working from home, although the performance was brutal at times. When the guys and myself were done filming, we couldn’t even walk the next day! After headbanging for what felt like an eternity, there was nothing better than laying on the ground!

When we first saw the treatment for the video, it was hard to imagine how it would turn out, however it exceeded all of our expectations. The sunny island felt more dystopian than anything else and our director captured the meaning of the song and the look of the band perfectly. Overall, it was a blast to work on and I hope you enjoy it as much as I do!”

Formed in 2014, ONI mastermind Jake Oni’s initial vision for the band was “to be the band he never got to see”. One that was deeply rooted in progressive metal but that had a feel all of its own, one that would rise above a genre that continues to churn out new groups with a similar sound. ONI‘s sound comfortably situates them among the genre’s heavy hitters, demonstrating spastic technicality and fast-paced verses like Protest The Hero and Arsis, with melodic progressive hooks echoing Between The Buried in Me. But while those artists are still positioned on one end of the metal spectrum, ONI digs even deeper with resonating groove-oriented guitars and mathematic rhythm patterns resembling artists like Lamb of God and Gojira.

The band’s upcoming new album Ironshore is packed full of contrasts and contradictions, grace and violence, and with the band disinterested in churning out endless soundalikes, each has a distinct character of its own – or more accurately characters of its own, since they refuse to limit themselves to a single mood or tone.

With Jake Oni handling vocal duties, Martin Andres and Brandon White on guitar, Chase Bryant on bass and Joe Greulich on drums, they are also perhaps the first metal band to feature a xylo-synth player, in the form of Johnny D, which adds an interesting and intriguing dynamic.

Stay tuned for much more coming from ONI in anticipation of their upcoming album release this fall.

Previous New music from Africali, “You Don’t Love Him Quite Like You Love Me”
Next Jasmin Stone announces “Time” music video