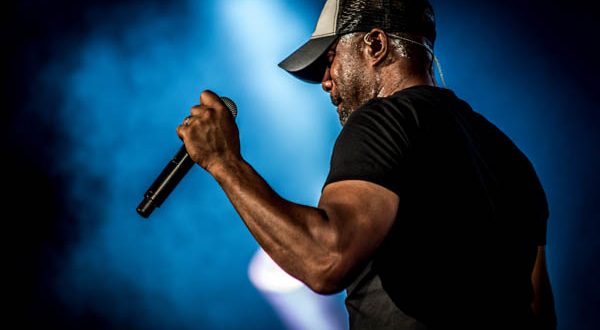 The show kicked off with a local favorite, Michael Ray. The next group Dan + Shay, they were very energetic and they had a very excited group of fans that LOVED them. I was excited to see Darius Rucker. Darius Rucker has been rocking his country career since 2008.

Besides his early career with Hootie & the Blowfish, he has not only put out an R&B album, but 5 country albums that produced several number one hits. His musical career has spanned through the genres. Not only is Rucker well known for his 90’s rock career, he kept blazing along while making a name for himself in the country music scene. In 2009, he became the first artist person to win the New Artist Award from the Country Music Association, and only the second black artist to win any award from the association.

The last time I remember seeing him was with Hootie & the Blowfish; so to see him as a country artist, I was wondering what he was going to bring to the table. He opened with “Lighter Up” and it was energetic and fun! He then went on with “Radio,” “Southern Style,” and “I Got Nothin”. I really loved watching him react to his fans; he was really connecting with them. He spent the time to go right up to them, high five them, smiling, and having that personal moment that you crave for as a fan. His band is amazing. They were musically talented and like Darius, they were all having a good time. It was so much fun to sit back and take it all in. He then sang “Time” and I was transported back into the 90’s, again, I really did love “Hootie”. He sang a good mix of his country hits, tried and true Hootie & the Blowfish classics, and a few covers. I spent time talking to fans throughout the performance and the one thing they all had in common to say is that he really just puts on a great show, I agree – I was not disappointed.

Check out some of our shots from the show below.

Metal!!! I am never without a camera, I am never without music, I can not live without coffee... I cook, I manage a band (shameless plug Modern Day Outlaw), I shoot people with my camera, and I drink tequila and whiskey... That's me in a nutshell! Follow me on Facebook, Twitter, and Instagram.
@@Melly1172
Previous Another Lost Year Releases New Video “We All Die Alone” & Announce Tour Dates
Next From States Away Debut New Video and Announce Sophomore EP