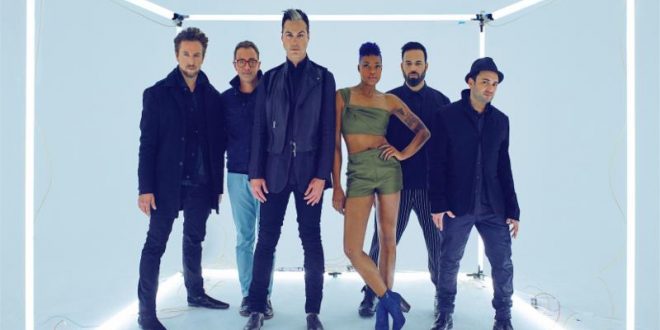 Fresh off the debut of their self-titled album, Fitz and The Tantrums announce their “Come Get Your Love” fall North American headline tour. The run will kick off with a pair of West Coast dates – an October 12 show at the historic Fox Theater in Oakland, CA and a hometown concert at the Greek Theatre in Los Angeles on October 14. Tickets for the Los Angeles show are already on sale. A ticket pre-sale for all other fall dates will begin Tuesday, June 21 at www.fitzandthetantrums.com/tour. Tickets go on sale to the general public on Thursday, June 24. See below for itinerary.

The band will perform on “Good Morning America” this Wednesday, June 22. Their “Get Right Back” summer tour is underway now and visits New York City’s Terminal 5 tomorrow, June 21.

“HandClap,” the album’s first single, has been nominated for a Teen Choice Award for Choice Rock Song. Fans can vote HERE. The track is currently has more than 8 million Spotify streams.

The song has been heard in the advertising campaign for the Fiat 500X Crossover (view the latest ad HERE) and in this trailer for the film Storks. It is also being used as the official song for The CW’s 2016 Summer and Fall Image Campaigns. “HandClap” is No. 1 on Billboard & Clio Music’s Top Commercials chart for the month of May. View Fitz and The Tantrums performing “HandClap” on “Jimmy Kimmel Live!” HERE and see the official video, directed by Marc Klasfeld (Wiz Khalifa, Twenty One Pilots), HERE.

The Los Angeles Times called “HandClap” a contender for “2016’s Song of the Summer” in this feature, which takes a look at the songwriting process behind the track and radio’s ecstatic response to it. “Fitz & The Tantrums deliver hook upon hook on catchy new single ‘HandClap,'” said Idolator and Harper’s Bazaar hailed the track as a “cheeky dance floor seduction ballad.”

USA Today put “Roll Up,” another album track, on its list of the “10 best songs of the week,” noting how it’s “infectious, pop-y, and hard not to bop around to when it floats in your ears.” The Boston Globe observed, “the album proves emphatically that Fitz can still craft a catchy chorus.”Newsday said,”Fitz and The Tantrums’ move from their retro-soul roots to the sparkling dance pop on their new album, ‘Fitz and The Tantrums’ (Elektra), might have been alarming if the Los Angeles band didn’t do it so well.”

Fitz and The Tantrums is the follow-up to More Than Just a Dream, which has racked up over 76 million album streams to date. The 2013 album contained the Gold-certified singles “The Walker” and “Out Of My League.“ Both tracks topped Billboard’s Alternative Songs chart – a feat accomplished by only three other artists in the chart’s 25-year history.

Previous THE WHO: To Perform Thursday, October 6 at The Santa Barbara Bowl
Next Gallery: Tidal Volume at the Duck Room in St. Louis, MO on 6.16.16