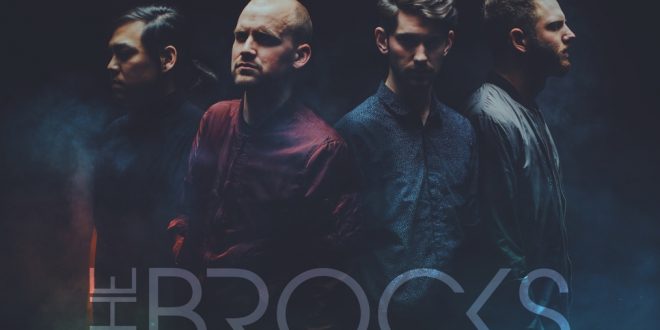 1.How does Utah shape your music? (If it does at all)
The scene here in Provo is strong. Even if bands don’t exactly shape our sound, there are great bands that inspire us to be better and work harder. There’s also a real sense of professionalism with the local bands that creates surprisingly top-notch performances.

With so many good bands for show-goers to choose from and stone cold sober audiences, it really forces you to bring your A game.

2. How do you stand out in the Utah musical scene?

We are pretty heavy on the electronic elements compared to most bands we see around here. We have all of the instruments of a typical rock band and then each of us has a synth or sampler on top of that. Putting on a great live show has always been #1 for us.

3.Your new single “Going Nowhere” has a distinct 80s sound. How influential is that era of music on the band?

The 80s were basically the beginning of this sort of electronic hybrid stuff. The auxiliary percussion and the analogue synths sort of have a throwback vibe. The band and our producers are definitely influenced by New Order, Depeche Mode, etc

4.You will be playing the Goosenecks Music Festival later this summer alongside bands like Young The Giant. What are you most looking forward to and what does playing the festival mean to the band?

It’s always a great being able to witness bands like Young The Giant put on a show. There’s a lot to learn, and it’s just a lot of fun. We’re looking forward to sharing the stage with them and some other great artists and playing at a beautiful location. It means a lot that people like us enough to include us in the lineup!

Dane: I’m most looking forward to Young the Giant’s performance. I’ve been a fan for a long time and ever since “Cough Syrup”, I’ve said if I could pick anyone else’s voice, it would be Sameer’s.

5.Your song “Circles” was featured in a national ad campaign for Kenneth Cole men’s fragrance line. How did that come about?

We were playing a gig in at this small bar/club in Hollywood and these two guys from Spain approached us afterwards. Turns out they are the founders Hunter & Gatti, the fashion advertising company that did the Kenneth Cole Mankind ad. They liked our music so much that they picked one of our songs they heard live for the ad. We hadn’t even recorded it yet.6.You worked with Grammy nominated DJ Kaskade for the documentary Under the Electric Sky. What was that experience like for the band?

6.You worked with Grammy nominated DJ Kaskade for the documentary Under the Electric Sky. What was that experience like for the band?

Kaskade is a huge supporter and believer in our music. The Under the Electric Sky collaboration was basically the foot in the door that lead to that relationship, so it was incredibly impactful to our musical careers.

7.If you could choose any act to open for your band who would it be and why?

Our favorite acts to open for us have similar vibes to get the party started and no live drum kit to set up.

8.The type of music you listen to can tell a lot about a person. What is the first and last record you purchased?

Last- Sego’s Once Was Lost Now Just Hanging Around

First- I pretty much just inherited CDs from my older siblings growing up. I’m sure the first record I actually purchased was like Linkin Park or Muse though hahah

First- My dad gave me Abbey Road for Christmas when i was 6 years old. The first ones I bought myself were all on the same day. Haha. I bought Tubthumper (Chumbawamba), Aquarium (Aqua) and Floored (Sugar Ray).

First – The Dance by Fleetwood Mac

We have music videos and singles to release!

10. parting message you’d like to send to your fans?

A lot of our fans have been patiently waiting for our music to be released. We’d like to say thank you! More music is coming, and this is just the beginning!