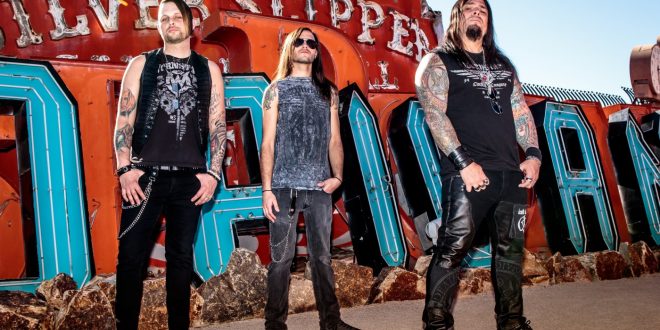 For their second EP, Angels of the Black Dawn, Part One, Los Angeles metal trio Death Division return with another set of hard hitting heavy tracks that should continue to gain notoriety for the group. Having performed with the likes of Megadeth, Hellyeah, and Black Label Society, Death Division have made it clear that they are making impressive progress in gaining exposure and expanding their fan base. While their first EP, We are the Fallen, wasn’t bad, it came across as rather safe for the band’s debut release. It was in no way a poorly performed or put together project, it just would have been preferred if the first taste of an artist’s sound was a bit more memorable. Nonetheless, Death Division, consisting of Sean De La Tour on guitar and vocals, Jerry Montano on bass and Alex Rivas on percussion, were definitely able to gain some notoriety with this release and the potential that they possessed was indeed present. Now that they have had a few years to work out their musical characteristics, the band has made some solid improvements with this new set of tracks thanks to a higher quality of production and the act of taking bigger risks with their musicianship.

The EP’s opener, “The Truth”, was a good choice as the first single since it does a fine job of capturing the essential sound that is prevalent throughout the project. This track is very reminiscent of the brand of rock that was mainly present in the early 2000’s, sounding similar to artists such as Sevendust, Disturbed, and maybe even some Mushroomhead mixed in there as well. While these influences are noted, the fact they they are so distinct could be either good or bad depending on what the listener’s stance is on that genre. For those that tend to shy away from artists such as these then this track might be slightly off putting for some, but for listeners who still enjoy that era of metal then this could very well be a nice track to experience. The track itself if fairly catchy and features good instrumentation that pairs well with its apocalyptic lyrics. As mentioned before, this track truly summarizes what the EP has in store so overall it’s a smart song to begin with.

The second tack, “See You Never”, takes things in a slightly different direction in terms of theme. The instrumentals are still good and the vocals are quite impressive, though the song’s topic, at least in this humble interpretation, was rather unexpected based on what was offered in “The Truth.” The lyrics feel a bit melodramatic, making the song come across as an angsty breakup anthem. The overall structure of the song is still pleasant but the lyrics themselves might be too over the top for some. The following track, “Run Away”, shifts back to the tone that the EP brought up earlier. “Run Away” presents singer Sean De La Tour’s best vocals on the entire project as he is able to showcase his range with memorable powerful screams. Thanks to these thundering vocals and once again impressive instrumentation, this track has a very climactic feel and is a true standout moment.

Track 4, “Dead Heroes”, does a competent job of continuing the momentum brought up from the previous song. The track is well performed and offers a catchy enough chorus, though it does wind up feeling slightly generic. The performances here aren’t bad by any means, there just isn’t an excessive amount being offered that makes the track overly memorable. The final track, “In Loving Memory” closes out the EP by taking things in a different direction than what’s mainly been presented from the rest of the project. It’s a nice change of tone while not being too flashy of a track. “In Loving Memory” offers a more clean and refined sounds to finish things off with and it did in fact manage to end everything on a relatively high note.

This is a well performed piece of metal, though the deciding factor of whether or not someone will enjoy it could entirely be determined by their preferences of the late 90’s/early 2000’s style of rock. If this era isn’t necessarily your cup of tea, then this project might not be for you. However, if you fall into the opposite category then this EP could very well offer a pleasant listening experience while also delivering a possible dose of nostalgia as well. Thanks to the enjoyable instrumentation and Sean De La Tour’s vocal skills, Angels of the Black Dawn, Part One has in fact proven that Death Division are improving their sound and could very well be an artist to keep a look out for in the future.

Cain Miller is an aspiring writer who hopes to work his way up and gain notoriety for his material. Having written about film, television, music, and sports, Cain is always looking to gain as much experience as he can and continue to improve his writing abilities.
@cainemiller
Previous In Lights Announce “Running With Scissors” EP
Next Chris Cornell To Kick Off Second North American Leg Of His Acclaimed Higher Truth World Tour Tonight in Clearwater, FL