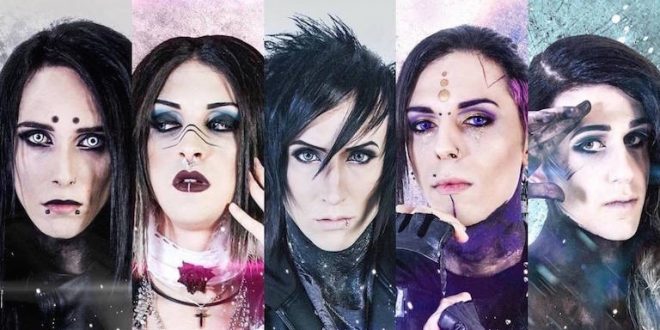 Rome, Italy Industrial-Metalcore artists Beyond The Fallen release music video for their new single “Anima”. It is the newest stand alone single released by Beyond The Fallen. “Anima” signifies the new direction for the band in sound.

“This song is our first step into a new territory. We’re experimenting a lot with our music as well as our visuals, trying to achieve something different but that’s still ours.

You can hear there are less industrial vibes in the song, which features catchy clean singing and a lot of diversity in the mood, that goes from heavy, to pop, culminating in an epic conclusion with strings and such. Not to mention the lyrics in japanese!

We tried something different for the video as well, going from the dark, industrial mood of our first video (Disconnected) to a white, clean background, where everything is clear and solid. We hope to surprise our fanbase, while we try to reach different people who can be interested in our new style of work.”-Yuki Guitarist

About Beyond The Fallen

Born and raised in Vatican City, headquarters of Christianity, in 2014 Beyond The Fallen members decide to form this freaky chimera. They released a full length album, called “You Rise, We Fall” in September 2014, and then started playing gigs around Italy for a promotion culminated at the Gothic Sofia Fest 2014, in Bulgaria.

In January 2015 they released the video for the single “Disconnected”, featuring the international performer Miss Crash, already seen in Marilyn Manson’s video for “Born Villain”. In July 2015 a remix by Nero Bellum from Psyclon Nine of their song “Unleash the Beast” is released as a lyrics video, anticipating the release of the EP “Re:Fall”, which also features a remix from Kristof Bathory from Urilia/Dawn of Ashes. 2015 ends in Bulgaria again, with Beyond The Fallen playing as headliners at the Gothic Sofia Fest 2015.

In 2016, BTF plan on going back to studio, finishing what they started with “Anima”; a new, different record set to surprise the old fans and amaze the new ones.

Previous Gallery: Brandi Carlile at Chaifetz Arena in St. Louis, MO on 6.9.16
Next A Work Of Fiction Release New Single “Falling to the Rhythm”