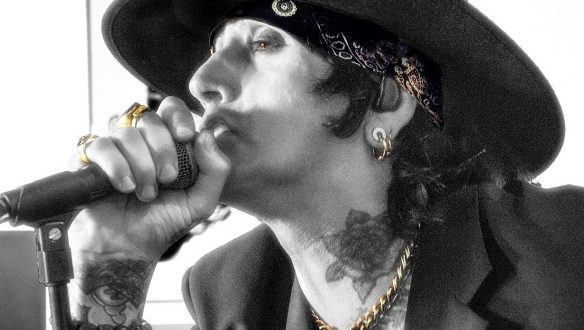 Please note: The heavy nature of some of the subjects discussed could trigger survivors of childhood abuse.

Childhood abuse is an all too familiar story in today’s society, whether it’s physical, sexual, psychological, or any number/combination of categories in nature. It is difficult to say exactly how many children are in such situations, given the varying methods of analysis within published studies and the fact that not all cases are reported.

That being said, in its 2013 Child Maltreatment Study, the U.S. Department of Health and Human Service’s Children’s Bureau estimates that approximately 679,000 children were victims of some form of abuse in 2013.

Blacklist Union vocalist, Tony West is no stranger to this story.

While music—to the tune of the Dead Kennedys, Black Flag, Circle Jerks, AC/DC, and David Bowie—helped West survive, he did not come out of the experience unscathed. Rather, West describes finding himself on a downward spiral characterized by drug, alcohol, and sex addiction, suicidal thoughts, body dysmorphic disorder, and an unhealthy relationship with women.

“Right from the gate, I got all these bad ideas about who I am and what women were about … I brought that bag of rocks into every relationship. Like how Joey Ramone saw the world through a rose tint when he wore his rose-tinted glasses, I was wearing these glasses about women for a long time until I realized, ‘Holy shit, this is not true,’” he says.

Now, West is channeling this discovery and his overall perspective into the track, “Evil Eye” from Blacklist Union’s fourth album and hard rock masterpiece, Back to Momo. Momo, of course, is a reference to the infamous Los Angeles massage parlor (where happy endings are aplenty)—which West acknowledges visiting without the boastfulness one would expect from a rock and roll frontman.

“I had a really bad idea about sex growing up. The first time I had it, my father bought me a hooker. I was 13, and it was before I had even kissed a girl,” he says. “[So the title] is kind of a sexual innuendo. It’s like, ‘My relationship has failed again. What the fuck is wrong with me? All right. I have to have sex, [because] I’m a grown ass man, so it’s back to Momo.’ It’s not something that I’m proud of or that’s fulfilling to me either, but it is what it is.”

The track itself is fast-paced, and composed of chugging guitar riffs and overlaid solos. West’s voice glides across the lyrics, its tone and emotion compelling listeners to want more. The closest acts to compare the sound to is Guns N’ Roses (and Velvet Revolver), although the track’s sheer energy and West’s vocals take the song to unimagined heights.

Blacklist Union paired the song with a music video this March that is full of flashing white lights and two juxtaposed images of West. In one, his body dances along to the beat and rocks his fedora to and fro. In the other, he’s restrained in a straight jacket and limited to jerking movements—a clear metaphor to the inner battle inherent in overcoming and accepting past trauma.

Midway through, the video also begins featuring a scene between a younger West, played by his son, and his mother. This, West says, was particularly difficult to watch during filming.

“He’s my best buddy,” West says. “I asked him if he wanted to do it and told him what it was about—age appropriate, of course—but it was really heavy, because my friend who was the mother in the video looks just like my own mother.”

“Evil Eye,” its music video, and Back to Momo are all striking, not only for Blacklist Union’s mastery of the “street rock” sound, but also for West’s willingness to tackle society’s dark underbelly. It’s a brave thing to open up about such experiences, especially on a public scale where someone who needs help may be listening.

West says, “Music saved my life, and I don’t say that lightly. Just now, I’m coming to grips with letting go and understanding that all that stuff I was taught about myself is bullshit. I can forgive my parents, because I don’t know what it was like for them. My mother loved me the way she loved me, and that’s all there is to the story.

“Not having to carry this bullshit around with me anymore drove me to write the song. I am the kid that needed music to survive, and I know there are others out there.”