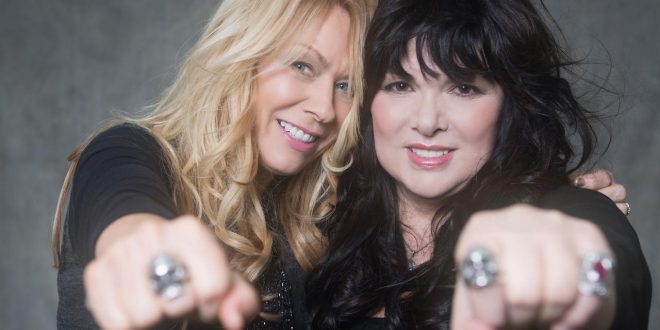 Rock and Roll Hall of Fame members HEART return July 8 with BEAUTIFUL BROKEN, their sixteenth album and their first on Concord Records. HEART has sold over 35 million records, and this anticipated album is their first in four years. BEAUTIFUL BROKEN finds Ann and Nancy Wilson exploring new songs, but taking some of their favorite “cherry picks” from their catalog and rerecording and rethinking them. The title track and first single features a dynamic guest vocal contribution by Metallica‘s James Hetfield with Ann Wilson. Click here to watch an album preview clip.

“There is really a seventies feel to this record both in the sound, and the way we got to the emotional core of each song,” says Nancy Wilson. “We picked songs that we always wanted to re-do, plus we’ve added three new tracks. On both new and old, we have the band playing together the way we used to. This is classic Heart.”

The seven tracks that were pulled from the HEART catalog were tunes both Nancy and Ann wanted another shot at, due many times to how they were initially produced. Songs like “City’s Burning,” “Down on Me,” and “Sweet Darlin'” have always been live favorites of the sisters, and of HEART‘s fan base, but they had somewhat languished. “Those songs may have fallen through the cracks, in a way, because of where radio was at the time when they were first released,” Ann Wilson says. “Rediscovering those songs, I found ways they emotionally still speak to me.” Two songs are from Passionworks, two from Private Audition, and two are from Bebe Le Strange.

BEAUTIFUL BROKEN‘s title track had been a bonus song offFanatic, HEART‘s last album, but this version is essentially an entirely new song with barnburner vocals-and even some lyrics-added by Metallica‘s James Hetfield. “It blows the previous version out of the water,” says Nancy. “James just took the song on, and what he added was perfect with a bite and a rock accent.”

BEAUTIFUL BROKEN was co-produced by Nancy Wilson with Heart‘s bassist Dan Rothchild. Rothchild had previously produced Better Than Ezra’s platinum-selling Deluxe, but he also comes from rock royalty: his father was legendary Doors producer Paul Rothchild. BEAUTIFUL BROKEN was recorded at Sunset Sound in Los Angeles, the same studio the Doors cut their best work. “There were eerie echoes in the hallway,” Nancy says.

Rothchild said his goal was to capture the human feel of HEARTlive in the studio. “On these classics, some of which had suffered from eighties-era over-editing-production-curse, we stripped the paint off and found the beauty underneath,” he says.

For Ann, the album allowed her to revisit, and re-sing, songs she felt “never reached their full development.” For Nancy, the lyrical heart came alive: “I felt these songs were poetic pieces that were lost in translation with the sounds of the eighties, which was harder and more digital. We wanted to drape them in velvet, and make them shine.”

One example of is “City’s Burning,” originally on the 1982 album Private Audition. “The first time we recorded that was in 1981,” says Ann, “and it was in a key that was a bit ‘show-offy,’ and sped-up. On BEAUTIFUL BROKEN, we put the key in the right place, and the song really bore fruit.”

Nancy Wilson sings one of three new songs, “Two.” The song had a different genesis than many HEART classics, as Wilson first heard it on a demo made for a television show her husband Geoff was working on. She reached out to the song’s writer–R&B sensation Ne-Yo–and asked if he’d consider giving her the song. “I went to work begging for the song,” she says. “Ne-Yo said, ‘sure.’ It ends up he’s a Heart fan. He may still release his own version at some point, but to me the song feels like mine now.”

One of the unique aspects to BEAUTIFUL BROKEN is the string arrangements on four songs done by legendary arranger Paul Buckmaster. Buckmaster’s resume includes work with the Rolling Stones and Elton John (“Levon”). “We were talking about how we wanted ‘Paul Buckmaster-type’ strings at one point,” Nancy said. “So then we decided to call Paul himself.”

Buckmaster‘s work on “Sweet Darlin'” is, in particular, a standout, but only because the strings highlight Ann‘s powerful vocals. Ann had always wanted another shot at “Sweet Darlin'” so it was an ideal choice for BEAUTIFUL BROKEN. “To me the original sounded somehow incomplete,” Ann says. This version, with Buckmaster’s strings, finishes the song properly, but it also showcases how Ann‘s voice has remained strong over the decades.

Ann and Nancy Wilson formed HEART when the idea of two women leading a rock band was still groundbreaking. From the moment 1976’s Dreamboat Annie was released, they became stars. With hits like “Magic Man,” “Crazy On You,” “Barracuda,” “Alone,” “What About Love,” and “These Dreams,” the band became one of the biggest hit-makers in the seventies and eighties. In 2012, their memoir Kicking & Dreaming: A Story of Heart, Soul and Rock & Roll. became a New York Times bestseller, and in 2013 they were inducted into the Rock and Roll Hall of Fame. They have sold more records than any sister act in the history of popular music, but they’ve done so keeping their vision–that women can both rock and put forth emotional intimacy–central to their sound.

BEAUTIFUL BROKEN follows in that tradition, an album with pure rock power on the title track, but also tender sexual yearning on“Language of Love.” It’s a contrast that has always been the essence of HEART. “We still make records like we always have, and they are always impossibly romantic, because Ann is always an impossibly romantic singer,” Nancy says. “In a world where there is less poetic lyric writing, we’ve always tried to plant a flag for poetry.”

That may seem “broken” in a way, in a world of machine-created pop music, but it is also certainly a beautiful vision. This year HEART will bring that vision to half a million fans during their summer concert tour, and BEAUTIFUL BROKEN extends that relationship with radio-ready songs, and deep album cuts.

The dates for HEART‘s headlining summer tour with Joan Jett & the Blackhearts and Cheap Trick are here: http://www.heart-music.com/tour