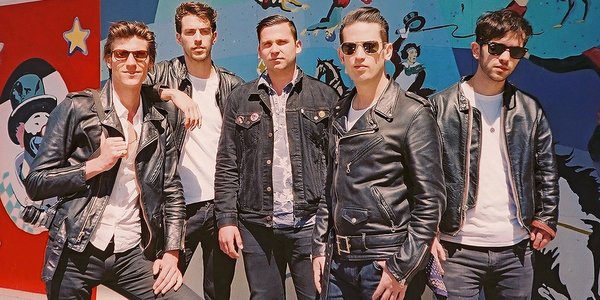 Interview: Jeremy and the Harlequins

1.How does your music stand out in the New York music scene? I wouldn’t limit the question to being about the NY music scene. Most of what I see happening in NY is similar to what I see across the country. What differentiates us is most rock bands right now play big amps, we play small ones. Bands now have synths or electronic backing tracks, we don’t. What you see is what you get. Drummers I see today play a full kit with drum triggers and usually one of the members, usually the singer, has a floor tom. We have a kick, a snare, one tom, and one cymbal. Also, our songs have hooks and are limited to about 3 minutes.

2. I recently caught your live show in Providence, Rhode Island and it was one of the best live sets I have seen. Where do you draw your performance energy from? Ideally, the crowd. That’s the best energy to feed off of. If the attendance is light, then alcohol is my second choice.

3. The band is heavily influenced by the 50s and 60s music and looks wise. What is it about that time period that speaks to you as a band? There were no smoke and mirrors, just the songs, the performances, the energy – this is the era for the foundation of what we call pop and rock music. Back then, the technology wasn’t even available to fake a band. Maybe that’s why we and so many others go back to it, because it feels real.

4. What can fans expect from your second album Into the Night which will be released later this summer? It’s another dimension to our sound. It has a few more ballads and a slightly more Americana tone to it. Still, it sounds like us. If you liked American Dreamer, I’m pretty sure you’ll like this one as well.

5. This past spring you played at SXSW. What was that experience like for you? I enjoyed it. I hadn’t been in years and I didn’t know what to expect. Besides our shows, I got to see a lot of cool bands, hang at a lot of cool restaurants and bars, and meet great people. Austin is pretty incredible.

6. You just shot your music video for “Into the Night.” Is there anything you can tell us about it? We shot it over a long weekend on the Jersey shore and in Williamsburg, Brooklyn. It has a very classic American feel to it which definitely comes across when you see it. Actor John Magaro (The Big Short, Unbroken) directed it and it was produced by Positively 4th Street (Beware of Mr. Baker).

7. Do you have any preshow rituals? Yes. A dozen oysters and a bottle of wine.

8. You have your own Fury Bros candle line. How did that come about? On tour, I go into a lot of different boutiques, markets, and shops that seem to be near the venues. I would buy candles or soap sometimes. One day my brother had the idea to make them. I thought that if we were going to do it, we should spin the design of them. Obviously, I’m pretty into classic American design from the 50’s and 60’s, so I decided to incorporate that aesthetic into the packaging.

9. The music you listen to can tell a lot about a person. What is the first and last record you purchased? The last two I bought were a Carl Perkins record and a best of Richie Valens record. The first record I bought on my own I believe was a Bryan Adams CD, but… funny enough, one of the first albums my parents got me that I loved was a best of Richie Valens record.

10.What is up next for the band? Our new record, Into the Night, comes out on Aug 5th on Yep Roc Records. The video for the single comes out soon as well. Lastly, we will have tour dates late summer/early fall so keep your eye out for that.