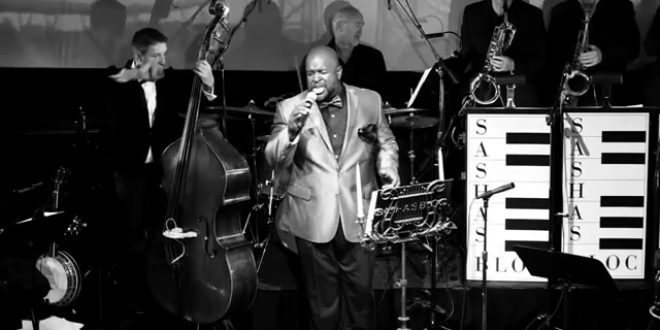 Sometimes you know quickly you’re going to be okay. A song starts and you are certain, less than twenty seconds in, this group of performers will provide everything you need from a piece of music. They will engage you mentally and physically. They will entertain you. Sasha’s Block newest single, “Runaway Blues”, glides into the listener’s life on melodic wings and never loses its grace or good sense of balance throughout. This is exceptionally textured music that’s often quite moving and conveys a strong sense of its individual parts without ever sacrificing its overall sound. Musicians who organically play well together are rare these days. Naturally, this is subjective, but this organic chemistry referred to comes from the feeling you get when you hear musicians who seemingly mesh together without little effort.

Much of this has to do with the song’s construction. “Runaway Blues” makes its impact on the listener in stages. The song soon transforms itself from a stripped back gospel number written for piano and voice into a larger band number with a light swing. Various other themes creep up as the song progresses. The introduction of horns in the song’s second half raises the stakes considerably and what was already a vivid track is further transformed into something grander, practically widescreen in scope. This is music that sings fluently and with tremendous passion.

Vocalist Alvin Chea bears much of the responsibility for that passion. He invests the song’s meaty lyrical content with an even-handed gravitas that creates powerful drama, but never cheapens the material. In the hands of lesser performers, the singer would have likely attempted to approach the vocals in a much more dramatic fashion, emphasizing the most obvious aspects and giving short shrift to the song as a whole. His comprehensive approach helps the song realize its potential.

The rousing chorus marks the song’s highest dramatic point but segues smoothly into a marvelously layered instrumental break that gives the band a chance to shine. They are collectively fantastic, but it’s moments like these when discerning listeners can clearly hear how this unit is so individually talented. Most importantly, however, is how well they listen to one another. It’s another example of the aforementioned chemistry that separates Sasha’s Bloc from many musical outfits writing, recording, and performing today. The addition of Chea’s cohorts in the vocal group Take 6 and the band’s willingness to work a little outside of their comfort zone makes for a winning formula on “Runaway Blues”.

In its own unique way, Sasha’s Bloc perform music every bit as Americana as the troubadours with their caps and acoustic guitars. The blues, gospel, and jazz influenced lexicon enlivening “Runaway Blues” pulls from the long record of 20th century American music and before. There is spectacular creative vitality fueling this piece as well and makes it much more than some mere curiosity in the modern music scene. Sasha’s Bloc is an imaginative and risk-taking musical unit who deserve to be heard the world over.

Previous Kurt Raburn: “Days of Vanity”
Next Leon Bridges at The Pageant in St. Louis, MO on 6.8.16