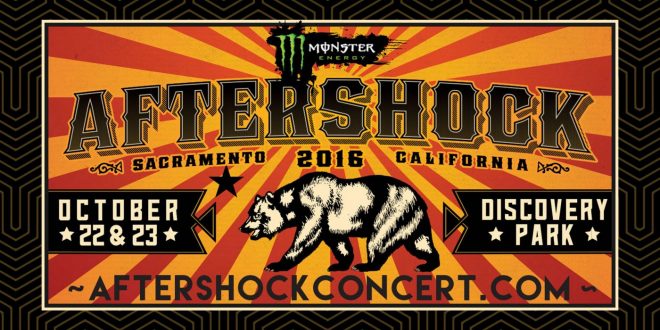 An awe-inspiring, momentous music lineup led by iconic bands Tool (in a rare U.S. festival appearance) and Avenged Sevenfold has been unveiled for the fifth annual Monster Energy AFTERSHOCK, which returns to Sacramento, California’sDiscovery Park Saturday, October 22 and Sunday, October 23.

California’s biggest rock festival will feature over 35 bands on three stages at Discovery Park, conveniently located near downtown Sacramento, where the American and Sacramento Rivers meet. The current daily music lineup for Monster Energy AFTERSHOCK is as follows:

“We’re excited to give fans a once in a lifetime opportunity to see Tool, Avenged Sevenfold, Primus, Slayer, Korn,Disturbed and the rest of this great lineup all together during this special weekend. Discovery Park is such a unique venue that allows us to put on an experience on a grand scale, but in an intimate setting that sets AFTERSHOCK apart,” says Monster Energy AFTERSHOCK founder and producer Danny Wimmer of Danny Wimmer Presents.

Monster Energy AFTERSHOCK tickets go on sale Wednesday, June 8 at Noon PT at www.AFTERSHOCKConcert.com. Tickets are limited and will go fast. Fans are encouraged to buy early so they don’t miss out on the chance to see so many iconic rock bands at one American festival. See below for details.

In 2015, a sold-out crowd of 45,000 was in attendance at Monster Energy AFTERSHOCK to experience the best hard rock, metal and alternative artists, along with gourmet food trucks and extensive onsite experiences. Loudwire.com called the festival “one of the nation’s premier music events.” Elsewhere, Johnny Firecloud of CraveOnline.com noted, “…Aftershock has found a new thread, and the way they’re approaching the festival ecosystem may just defibrillate the soul of rock fests in America. They’re mixing vibrant alt rock colors into what was typically a monolithic skull-and-crossbones metal template of black on black, side-stepping the big-box corporate model and building peripheral excitement through on-site activities, enhanced Gourmet Man Food attractions and more” (February 18, 2016).

Monster Energy AFTERSHOCK tickets go on sale Wednesday, June 8 at Noon PT at www.AFTERSHOCKConcert.com. Tickets and VIP packages will initially be priced as follows (increasing in the coming weeks):

Monster Energy AFTERSHOCK is also offering a Park & Ride shuttle program this year, since parking at Discovery Park is extremely limited. Each Park & Ride ticket includes parking for your vehicle at Sleep Train Arena and a non-stop shuttle directly to the festival site. Festivalgoers are encouraged to carpool to Sleep Train Arena and save. For pricing and more details, visit www.AFTERSHOCKConcert.com.

Here’s a preliminary lists of onsite experiences and nonprofit organizations with a presence at Monster Energy AFTERSHOCK:

Monster Energy Experience/Sampling:
Monster Energy will be keeping all fans fueled up and ready to rock by offering free sampling on their Monster Energy viewing deck. Enjoy Monster Energy drinks from one of the best seats in the house. Make sure to check back throughout the festival for a schedule of Monster Energy’s interactive artist experiences.
Facebook: facebook.com/monsterenergy
#monsterenergy #monstermusic

Dyin 2 Live / Fxck Cancer:
The F C Cancer Foundation’s mission is to fight cancer by raising awareness and to educate about early cancer detection, ultimately putting an end to late stage cancer diagnosis. The Dyin 2 Live wish granting program looks to enrich the lives of those fighting cancer by offering them an experience that will bring joy, hope, inspiration, and courage into their lives. In doing this, the program hopes it can help give the cancer fighter a chance to forget, even if it’s only for a day, what they are battling. The hope is that it can be used as a source of inspiration to those needing a brighter day in their darkest hour.
www.FxckCancer.org
www.makingdreamshappen.org
www.Dyin2Live.org
Facebook: facebook.com/Dyin2LiveDREAMS or facebook.com/FxckCancerUSA
Instagram: @FxckCancer and @Dyin2LiveDreams

MAKE YOUR MARK Graffiti Zone:
This interactive graffiti art installation will showcase multiple live demonstrations and will allow AFTERSHOCK artists and fans the chance to add to the exhibit.

Take Me Home Animal Rescue:
Take Me Home is a not for profit, volunteer based foundation that has been saving the lives of homeless animals since 2001. Many families living in low-income areas cannot afford medical care, basic vaccinations, or spay/neuter surgeries for their companion animals. The donations raised help us to fund mobile veterinary hospitals to travel into these under-served areas to provide free spay and neuter, vaccinations, microchipping and administer medical care for animals in desperate need. Take Me Home also supports local animal charities. Come by the booth to help out our furry friends by buying a shirt, signed merchandise, and entering a raffle. Danny Wimmer, Founder, DWP, said, “DWP is proud to support various charities, giving them a national platform to promote their messages. We are particularly fond of Take Me Home, which advocates for animal adoption. I hope everyone stops by their booth and supports their fundraising efforts to help animals in need.” For more information, please visit: www.takemehome.tv.
Facebook: facebook.com/TakeMeHomeRescue
Instagram: @TakeMeHomeRescue
Twitter: @TMHRescue

Life Looks Good On You:
Monster Energy AFTERSHOCK Festival has partnered with Sacramento County Department of Regional Parks for the Life Looks Good On You life jacket water safety campaign. Danny Wimmer Presents is pledging support with Monster Energy AFTERSHOCK alumni and DWP friends to create awareness for the Life Looks Good On You campaign. So far, music artists that have joined the efforts include Sacramento’s own Deftones, Rob Zombie, Disturbed, Five Finger Death Punch, Papa Roach, Pop Evil, and Avatar. Photos of band members wearing life jackets will be part of a social media campaign designed to encourage people to safely participate in water activities by sharing photos of themselves and friends wearing life jackets.
www.lifelooksgoodonyou.org
#sacrivers

LTD (Living The Dream) Foundation:
A portion of all Monster Energy AFTERSHOCK ticket fees will be donated to Living the Dream. LTD Foundation bridges the music industry together with fans who are fighting terminal illnesses by giving them All Access VIP experiences backstage with their favorite bands and artists.
www.ltdfoundation.org