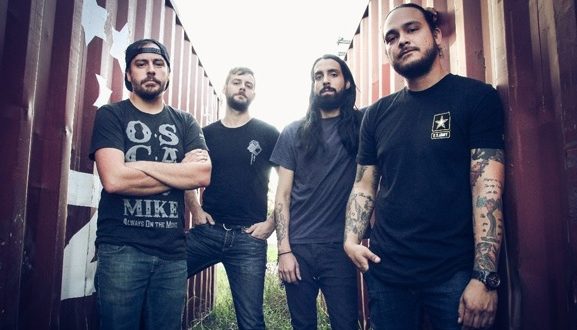 Rekindling the fires of rock n’ roll is alternative/hard rock outfit Another Lost Year with their second full-length album, Alien Architect. Available now via Mirage M’hal Records/EMP/eOne, this album is full of complex, explosive melodies and captivating lyrics that make for a fantastic listening journey.

Founded in 2011 in Charlotte, NC, Clinton Cunanan (lead vocals/guitar), Adam Hall (bass), Jorge Sotomarino (guitar), and Nathan Walker (drums/vox) hit the ground running with their 2012 full-length debut album, Better Days. Since then, Another Lost Year has seen success on iheartradio and SiriusXM (both of which have played the band’s singles in regular rotation), had their music featured on MTV’s The Challenge: Rivals II and Best Ink, and even have even been played on the NFL’s Opening Day highlight reels for the Jets and Patriots game. Alien Architect is a bold step forward for ALY, taking the band off to Illinois and enlisting Jose Urquiza of 3 Years Hollow to help produce, mix, and engineer this collection of songs.

The intro track sets the mood for Alien Architect, featuring the iconic speech from the first episode of HBO’s The Newsroom, before the guitars punch through with heavy riffs in “Wolves.” This song, which has been gaining some radio attention, comes across to me as a call to become aware. With lyrics like “How do you even sleep at night when the wolf’s at your door and no one’s in sight” combined with the righteous force in the melodies, Another Year Lost gives me some strong Disturbed vibes.

“Bastard Sons” keeps up the energy of “Wolves,” but the music becomes angrier and features a pretty awesome solo to fan the flames. Keeping with the self-awareness motif, I get the feeling that this is more of an anti-religion theme, bearing the message that it’s time to be on your own, free of preconceived notions.

While it starts off a little quietly, “Trigger Finger” quickly erupts into a song that I can see inspiring moshers into a frenzy. While embittered guitars set the mood, the quick snare taps ring out like automatic rifle fire. Cunanan’s voice drips with disdain as he sings about the sort of person who starts a fight they’ll never win.

The somber tones of “Best Is Yet To Come” slow the album down for the first time. The title speaks for itself, but the emotion poured forth by the band really drives this song home to the heart. With the simple acoustic guitar filling the soaring melodies with quiet lulls, and the solo that stands as the pinnacle moment, this track is one of my favorites on Alien Architect.

Kicking right back into the driving pace with a playful swagger, “Run The Tank Out” belongs on every road trip playlist. Sexy lyrics combined with the appeal of jumping in my car and driving until I run out of gas make this track the most carefree on the album.

The wanderlust lasts only briefly, however, as “This Is Life” brings me back to the stark reality of the ugliness of life. The vengeful lyrics, hard push of the drums, explosive melodies, and female backing vocals provided by Devon Peterson of Motorbiscuit all come together to make this an incredibly layered song.

Acoustic guitar strums and clear drums open “He Took Beautiful Away.” This tragic number empathizes with the victim of an abusive relationship, and the band has created a beautiful song in its simplicity. The bluesy rock feel of this song reminds me of Adelitas Way, and it’s even gotten stuck in my head. After all, this woman likes to be reminded that she’s beautiful.

“Memories” keeps the acoustic session going in this ballad of regretful nostalgia. The backing vocals during the quiet moments add depth to the song, and make me wonder about where things could have taken a different turn in my own life.

“We All Die Alone” explodes back into the high energy with a renewed vigor. The morbid lyrics flirt a bit with cynicism, and the vocals turn a bit haunting during the bridge while the guitars are both methodical and impatient. There’s a lot of complexity in this song, and I feel that with a bit of polishing, this could be an incredibly solid track.

“On And On” starts off great, with a conversation playing behind guitars that teeter on the edge of turning frantic. I get a distinctly worn-out feeling from the lyrics, and even from Cunanan’s vocals, like being tired from repeating the same things day in and day out, and desiring something to break out from the monotony.

The snare drum opening sets a steady pace for “Holding On/Letting Go,” and allows the guitars to come in and set up a driving pace. Here, the lyrics show me that holding on and letting go can result in the same outcome, but that it is most important to have faith in the friends that would see me through to the end of my struggles.

Overall, I enjoyed Alien Architect, and I feel that Another Lost Year is coming into their own as a band, and emerging as a true force to be reckoned with. Definitely check these guys out by giving them a listen over on Spotify or grab a copy of Alien Architect through iTunes or the EMP merch store. The band is also on tour, so check out the dates below and be sure to rock out with them as they take the stage to celebrate the release of this newest album.

Previous Gallery: Solo Woods at The Pageant in St. Louis, MO on 6.8.16
Next Interview: Jeremy and the Harlequins