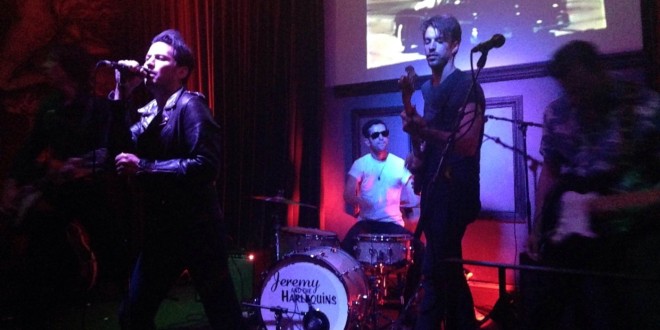 Anyone who is familiar with the New York centered band Jeremy and the Harlequins know that they draw their inspiration, sound and look, from the late 50s and early 60s. So when the group performed June 1st at Dusk bar in Providence RI, their first time to the smallest state, playing in front of a backdrop of silent film clips of vintage cars and drag races one could feel the band were at home.

The set which began roughly around 10pm and opened with back to back toe tapping numbers “Heart of Stone” which immediately went into “Cam Girl.” The band oozed coolness in spades, drummer Stevie Fury donning black shades throughout the entire set while brother, and lead singer, Jeremy Fury decked out in a white t-shirt and black leather jacket, collar popped of course, and slicked back hair was the embodiment of the retro time period the group finds invigorating. Though the crowd was small Jeremy and the Harlequins put every ounce of energy they had into each song, Jeremy swiveling his hips Elvis Presley style and often coming off the stage into the crowd singing directly to the audience.

In addition to songs off of their first album American Dreamer like the infectious “Settle Down” and a showstopping rendition of “Right Out Of Love” which featured Jeremy drawing out the start of the tune, slowing it down to showcase his vocal range even further, the band also delighted the audience with two new singles off of their upcoming album including “No One Cares” and “Into the Night” which definitely had the audience clapping along.

But the highlight of the set was the closing number “You’re My Halo” in which the band poured their blood sweat and tears into, dipping down to the ground on certain musical notes in unison making every fiber of your being feel the electricity coursing through your veins. When Jeremy ended the song on his knees belting his heart from the inside out it was impossible to look away and certainly left the crowd clamoring for more eager for their return. 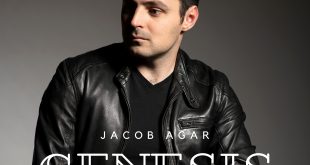