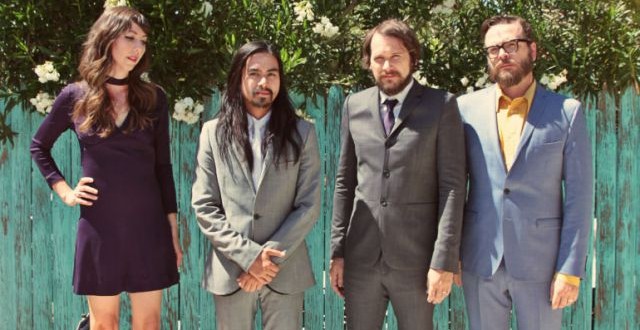 In addition, Silversun Pickups discuss the making of their latest record, Better Nature, as well as starting their own record label in a Scott Weintrob directed mini documentary. The film is a story about friendship, independence and the making of a record. The video can be purchased via Vimeo on demand at http://vimeo.com/ondemand/silversunpickups.

Recently, the official music video for “Circadian Rhythm (Last Dance)” premiered on Stereogum. Of the track, Stereogum says it’s, “a healthy dose of melodrama, smoke, and glitter, the band shows off their ability to produce visuals to match their high-energy dream-pop sound.” The song is the latest single off Better Nature, out now on New Machine Recordings.

“Circadian Rhythm (Last Dance)” features a duet between lead singer Brian Aubert and bassist Nikki Monninger. Lead vocalist Brian Aubert explains, “I wrote the music for this song but Nikki wrote the lyrics to it. It’s really an homage to a friend of hers that passed away recently. I think it’s the first time Nikki wrote most of the lyrics. We knew we were going to do this duet together and I really knew she had something going on that needed to come out and I’m happy this was the vessel for it.”

The band’s critically acclaimed album, Better Nature, is available now via the band’s newly formed label New Machine Recordings. Under The Radar calls the album “…as propulsive and arena-ready as ever” while the LA Times says it “has a clarity and inventiveness that’s rare for a big band a decade into its career.”

Better Nature is Silversun Pickups’ first new album in more than three years and was produced by Jacknife Lee (U2, Two Door Cinema Club, Crystal Castles), with whom they collaborated on 2012’s Neck Of The Woods. The album was mixed by Grammy award-winning engineer Alan Moulder (My Bloody Valentine, Nine Inch Nails, Royal Blood).

In August, the band released the first single “Nightlight,” which was accompanied by a hallucinatory music film written and directed by legendary filmmaker Mark Pellington (Arlington Road, The Mothman Prophecies, Foo Fighters, Bruce Springsteen, Pearl Jam). “Nightlight,” which Absolute Punk called “one of the most deliriously catchy and undeniably immediate songs Silversun has made in their careers,” reached Top 5 on the Billboard and Alternative Radio Charts.