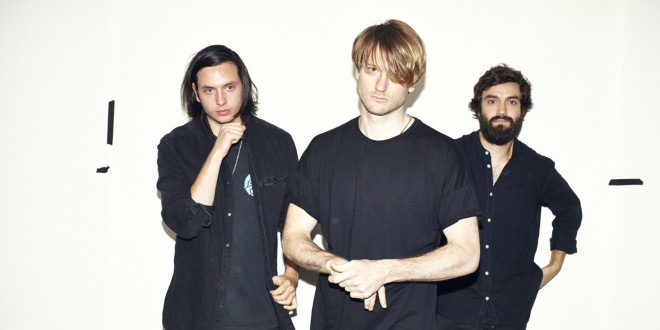 British alt-rock trio DINOSAUR PILE-UP is gearing up for the release of their third studio album ELEVEN ELEVEN via SO Recordings / Caroline on August 26, 2016. Lauded as “skillfully-crafted blast of modern grunge, and well worth your time” by Rock Sound, ELEVEN ELEVEN takes the band into heavier and more intense territory, evoking the riffage and strains of their heroes Quicksand, Refused, Deftones and Helmet.

“What’s really exciting for us about this record is it’s the first time we’ve ever been able to capture the energy and flow that we have live,” says vocalist/guitarist Matt Bigland. “Because it’s the first time we’ve recorded an album together in a room, like when we are playing live or rehearsing, we were able to shape the songs and put them down in the way we want to play them live. Whenever we wanted something to be heavier, or more intense, we just changed it there and then. It was awesome. So we feel really good about it. It sounds like us, right now.”

Sculpted by the expert hands of producer Tom Dalgety (Royal Blood, Band of Skulls, Killing Joke, Turbowolf, Siouxsie) at the helm, the album features crushing, jagged riffs that beef up the flesh on this Dinosaur’s bones which  Kerrang! characterizes as “Crushing and swaggering. Like Godzilla in loafers.” Up close and personal in subject matter while staying sonically hard-hitting and thunderous, the album tackles topics such as empowerment (“11:11”), to nihilism (“Nothing Personal”), to letting go of the things that weigh you down (“Might As Well”), to bottomless moods (“Crystalline”) and suffering from anxiety while on tour (“Anxiety Trip”).

Calling on the age-old symbol of synchronicity in numerology, the crushing first single “11:11” became not only the introductory track for the new album but also a sign. “The whole 11:11 thing is an obsession of ours, and our whole crew now,” Bigland explains. “We see it everywhere. I guess the song is about self-belief. It’s about being empowered and finding significance in insignificance.” The official video displays the band at their most visceral, performing the song with scenes interspersed with snippets of their live shows, including scenes from their supporting slot opening for Brand New in the US. The track is now available for purchase worldwide as of today and the official video can be viewed here:

Formed in 2007, Dinosaur Pile-Up broke out of the thriving Leeds rock scene (Gang of Four, Alt-J, Wedding Present) and instantly drew favorable comparisons to the cream of ‘90s US college rock such as Smashing Pumpkins, Weezer, and Superchunk. Named for a scene in Peter Jackson’s remake of King Kong where a stampede of dinosaurs collides at the foot of a mountain, Dinosaur Pile-Up put out their first official release, The Most Powerful E.P In The Universe, in 2009 and have gone on to record two studio albums, 2010’s Growing Pains and 2014’s Nature Nurture.  They’ve toured with Weezer, Pixies, Brand New, Royal Blood, Pulled Apart by Horses, among many others.

Dinosaur Pile-Up  is Matt Bigland (vocals, guitar), Mike Sheils (drums), and Jim Cratchley (bass). ELEVEN ELEVEN will be released on August 26, 2016 via SO Recordings / Caroline. Receive an instant download of the single “11:11” with pre-orders through iTunes.