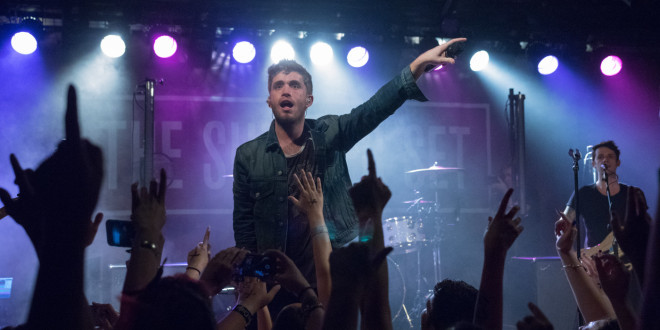 Gallery and Review: The Summer Set at Paradise Rock Club in Boston, MA 5/28/16

The Summer Set stopped in Boston on their Stories For Monday Tour on May 28th along with Handsome Ghost, Royal Teeth and Call Me Karizma.

They opened the set up with “Figure Me Out,” a single off their new album Stories For Monday, followed along with “Jukebox (Life Goes On)” as well as “Boomerang.”

Somehow, Boston managed to fit 900 people into the small Paradise Rock Club, which made this show the biggest of the entire Stories For Monday Tour, and it had also been a long time since The Summer Set had been in Boston.

After playing a few old songs like “The Boys You Do (Get Back At You)” The Summer Set needed to make up for some lost time of when they were in Boston on St. Paddy’s Day and they could not get drunk, they did this by playing a song about drinking on a Tuesday, even though it was a Saturday: they played “All My Friends.”

They didn’t want to let New York have all the fun, so they decided to play a song that wasn’t originally on the set list for the night, and they played “All Down Hill From Here,” which was followed by “Chelsea,” after a brief break. Within the first few seconds of “Chelsea,” Jess had managed to break her kick drum, but continued playing until Brian realized there was something wrong. After a brief intermission to change out kick pedals and whatnot, the band resumed playing “Chelsea.”

Before playing “Legendary,” Brian decided to tell the story of the song,

“For the first time we took it bak to the basics and produced an album ourselves and that’s Stories For Monday. But once upon a time, four years ago in a house in Arizona we tried to produce an album ourselves called Legendary. We moved into this awesome house, set up a recording studio, and we didn’t get anything done at all. For the first time in a while we were home, we got to see our friends and our families. But on the night we moved into this house we had a party and everyone was having a great time and I was in my room, feeling sorry for myself watching reruns of a show called How I Met Your Mother, and some teenager tweeted me saying, “If you love How I Met Your Mother so much why don’t you write a song about it?” and I thought, well thats a pretty stupid idea, I’m gonna try it. Challenge accepted. And if there’s anything I’ve learned it’s that sometimes the most ridiculous ideas in the world make some really incredible things happen because we’re here tonight and that’s pretty amazing because you’re the biggest show of this tour and we got a new album out which I didn’t think was gonna happen and it all comes back to this moment writing this song.

“I’d like to play a song right now called legendary because sometimes a ridiculous idea can change everything you know about yourself. This is a song about a little bit of hope, about friendship and drinking and peter pan, but mostly it’s about recovering from one of the worst years of your life all I gotta say so far about this one, it’s pretty fucking great. If you know the words sing along, if you don’t sing whatever the fuck you want, this song is called “Legendary.”

The Summer Set concluded their set with an encore of “Wasted” and “Lightning In A Bottle.”

Caitlin Dunn is a Massachusetts based photographer who loves photographing concerts as well as events and lots of other things!
@@caitlindphoto
Previous Gallery: Daywave at the Knitting Factory in Brooklyn, NY
Next Gallery: Kevin Abstract at The Pageant in St. Louis, MO on 6.1.16