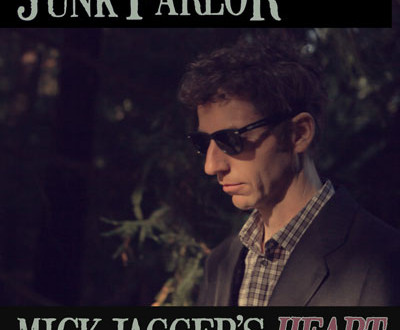 Junk Parlor has just released a new single, just in time for summer titled “Mick Jagger’s Heart”. It’s hard to tell from the title, but the song is about the hardships that come from being in a relationship. They go on to say that it is so terrible that even standing next to the person is becoming difficult. The song starts off with a groovy guitar riff that makes it suck the listener into their world. Things start to get graphic when the chorus chimes in saying “Doctor won’t you please tear it out and place it in a jar next to Mick Jagger’s Heart”. Ouch, that’s gotta hurt. This song was refreshing to hear, in a world filled with pop music, it’s always nice to be exposed to a different sound. Junk Parlor is a great example of that

Another song from their previous work is “Melusina”. This is the title track to one of their previous compilations. This track starts off with a haunting string section, which makes it seem very dark and chilly. One thing I admire about Junk Parlor is that they remain true to themselves. All of their songs fall in line with their 1950’s theme, which makes it easy to know what to expect. This song tells the story of a medieval European tale, about the goddess named Melusina. As legend has it, she is a feminine spirit that resides in fresh water. Her appearance is that of a woman, with the body of a fish, hailing from France. She might have been one of the first mentions in writing about mermaids. I think Junk Parlor did a great job of putting their spin on European folklore, bringing a new sound to an old tale. According to the song, Junk Parlor believes that she was “awfully nice”. I’ll take their word for it.

I think Junk Parlor has a hit on their hands. They are a gypsy junk rock band, which allows them to be unique in nature. From just listening to a handful of songs I can hear influences from early boy bands, doo wop, swing and of course Mick Jagger. Junk Parlor’s cohesiveness with their sound also solidifies their brand, making them someone to watch out for. They’ve already had a bit of success, performing at many festivals across the U.S., including SXSW, Gaia Fest, Djangofest, Kate Wolfe fest, and outside lands to name a few. The lead singer is Jason Vanderford, who brings his intricate vocals to all of the songs. He’s accompanied by a wide range of instruments, including the guitar, banjo, percussion, cajón, and much more. Overall I’d give this song an 8/10, it was a solid track. I did enjoy its upbeat nature, however, it was a bit hard to understand the meaning of the song. People who are not familiar with 1950’s culture might not catch on right away. However, it still was an enjoyable experience and a great switch from traditional pop music. I look forward to hearing their work in the future.