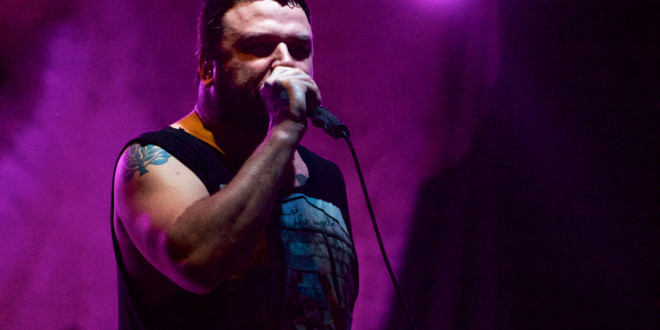 The first thing that needs to be stated about a Say Anything show is that anything can happen.

With over 80 tracks spanning a total of seven albums there’s no guessing on what line-up the band decided on for the setlist, and with many songs featuring guest musicians, there’s no telling who will join Max Bemis on the stage. So, as the lights finally dimmed down after mewithoutYou’s set at Orlando, Florida’s The Beacham on May 24, the crowd erupted with excitement and anticipation for what was to come.

As soon as Say Anything took the stage, the energy at the venue was nonstop right until the end.

Say Anything settled on an incredible setlist, resulting in a mix of more recent tracks such as “Give a Damn” from their latest album I Don’t Think It Is and older tracks such as “Woe” and “Every Man Has A Molly” from their 2004 album …Is A Real Boy. For certain songs, guest musicians joined Bemis on stage. During the emotional rollercoaster that is the song “Push,” mewithoutYou’s Aaron Weiss came to sing his portion of the track. Once Weiss left the stage, another guest emerged, truly making the night memorable: Sherri DuPree-Bemis, Max’s wife. The couple performed “So Good,” with Sherri leaving after and returning for “So Good.”

Another reason the night’s performance was so memorable was Max Bemis’ attitude throughout the whole show. He continued to thank the audience, even mentioning that he should have to pay some form of fee for being able to perform for such a good crowd. His gratitude resulted in a very intimate environment that made it feel safe for fans to cry during the last track, “I Want To Know Your Plans,” which Bemis played alone, accompanied by a light show that made the venue’s roof appear like a night sky.

Overall, Say Anything’s performance at The Beacham was a memorable, talented one. With a spectacular setlist, an intricately designed light show, and a great atmosphere, there were no complaints held for the show.