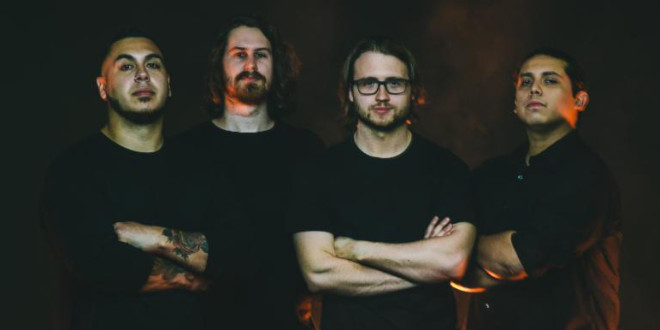 THE ZENITH PASSAGE Set To Tour North America This Summer

Los Angeles death metal faction, THE ZENITH PASSAGE, is gearing up for a lengthy Summer live takeover. The trek begins June 19th in Salt Lake City, Utah for five dates with The Faceless. From there the band will unite with fellow technical death veterans Psycroptic and Beyond Creation for ten shows from June 26th through July 7th. Rivers Of Nihil replaces Psycroptic on July 8th through July 23, followed by three THE ZENITH PASSAGE headlining shows to close out the tour. See all confirmed dates below.

THE ZENITH PASSAGE will be touring in support of their recently-issued Solipsist full-length, out now on Unique Leader Records. The forty-minute debut examines the idea of solipsism, a philosophical theory that the self is all that can be known to exist, anything else outside of one’s own mind is uncertain. THE ZENITH PASSAGE, which features within its ranks current and former members of The Faceless, Fallujah, and All Shall Perish, builds upon this foundation, expanding into themes of nonexistence and a computer-generated fictional reality experienced by all of humanity.Solipsist demands that listeners join the band on their voyage to explore the unsettlingly complex and improbable world they’ve uncovered in this bold experiment, this gut-wrenching visceral transmission of disturbing intellectual revelation.

In an 8/10 review of Solipsist, Decibel Magazine observes, “What sets THE ZENITH PASSAGEapart from say, The Faceless… is the way they glide in and out of their voluptuous moments rather than being all fucking abrupt. While the band does apparently draw inspiration for their attacks from a handful of antecedents – most notably Opeth and Yes – they’re not into repeating themselves, either.” Dead Rhetoric notes in a 9/10 score, “The type of album that will get modern death metal fans drooling, Solipsist captures the spirit of genre to a tee. Between the balance of tech, atmosphere, and melody, THE ZENITH PASSAGE are doing some exceptional stuff. The year’s first must-have tech-metal release.” Sputnik Music awards the record a 4/5 rating issuing “THE ZENITH PASSAGE have constructed a very strong record, overcoming expectations and improving massively in all categories…Solipsist is most certainly the most logical progression from Cosmic Dissonance, containing a load of energy and passion throughout that can be experienced in every track… THE ZENITH PASSAGE have sent out a clear message that they’re not to be cast aside as a Faceless clone and are ready to challenge the modern genre giants.” Adds Wonderbox Metal, “The level of musicianship is absurdly high. With so many complex guitars parts, twisting melodies and outright mind-ripping axe-shredding,Solipsist doesn’t leave the listener wanting in the technicality department. That the mayhem is occasionally punctuated by more atmospheric and relaxing moments just serves to make the extremity all the more powerful.”

Solipsist was engineered, mixed and mastered by Zack Ohren (Animosity, Suffocation, All Shall Perish et al) at Castle Ultimate Productions with additional engineering by guitarist/vocalist Justin McKinney and Michael Keene (The Faceless) at Keene Machine Studios. Solipsist includes a guest vocal appearance by Fallujah’s Alex Hofmann, a guitar solo by Wes Hauch (ex-The Faceless) who also co-wrote a portion of seventh cut, “Hypnagogia,” a synth solo by Vikram Shankar and cover art by Ken Sarafin (Skinless, The Kennedy Veil, Archspire et al). To order Solipsist, got to THIS LOCATION.