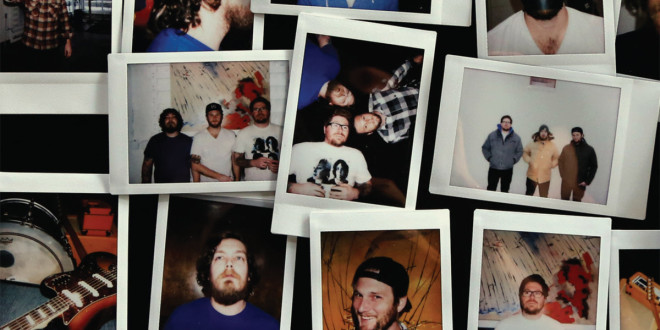 Inbokeh’s debut release Into the Sun is one of the more energized examples of the power trio format in recent history. The configuration was once a relative rarity, but the increasing prevalence of three piece lineups over the last twenty years has a lot to do with artistic and financial demands alike. For Inbokeh, working in this format clearly maximizes the explosive potential contained within each of these tracks. Inbokeh performs and is recorded in such a way that they come rampaging out of the speakers every time. Even when they are taking their time on particular tracks and trying to develop musical motifs, there’s an overwhelming sense of barely contained energy swelling within the sound.

It’s obvious on the opener “Cool Days”. The guitar distortion seems to roll over listeners in slow moving waves and there’s ample space scattered through the track that gives the song additional gravitas. The way Swafford manipulates sound, particularly distortion, will remind some of how Neil Young uses distortion in his work with Crazy Horse. Vocalist and bassist Jonathan Burgess turns in an impressive opening performance as co-anchor of a mighty rhythm section and an emotive singer capable of holding his own against the massive musical storm they conjure. “Too Good to Be My Devil” has a rugged, defiant edge and superior drumming from Cody Smith with a particularly nasty snare bite. The EP’s production is an important factor in its success and nowhere is that claim born out more clearly than here – and there’s equally no question that this song demands a prominent spot in the band’s live show. “Spend Time” has a lot of melody and muscle, some surprisingly dissonant chording, and a romping tempo that creates a great contrast between the song title and its subject matter. Inbokeh does a fantastic job of embodying the relentless speed of passing years in this song and the musicians play in lockstep with each other.

“Head Out into the Sun” is the EP’s obvious title track with only a slight difference in phrasing and it’s one of the best songs on the release. The themes of freedom, regret for the past, and time that fill the EP’s six songs finds an impressive, all-encompassing synthesis here with lyrics that are developed more than elsewhere. In the hands of a lesser or more calculating act, the song’s sentiments would ring like hollow clichés, but the dramatic arrangement and tonsil-shredding wail powering the song reveal the complete commitment the band gives to the song. The EP’s last track, “Ghosts in my Hallway”, is clearly the second centerpiece song on the release and its longer running time provides objective evidence of that. Unlike the title song, this deals more with hoping to one day understand how to use the past for good instead of merely being haunted by the memories and regrets.

The second half of the EP is dominated by the aforementioned duo of songs and the release is better for it. It closes Into the Sun in a serious way that says, yes, this is a band capable of entertaining any audience, but equally so, Inbokeh has the potential to make eloquent personal statements musically and lyrically capable of resonating with a large scale audience. Into the Sun is a fantastic opening effort for any band.

Previous “Evening at the Marketplace” – a single by Mortinus
Next Gallery: Mallory Knox at Slam Dunk North, Leeds, 28.5.16.