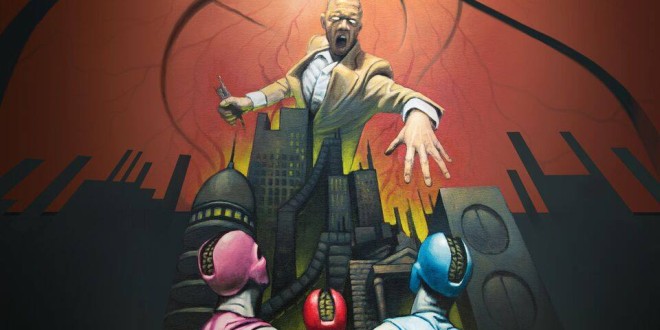 New York City’s Pseudo/Sentai has returned with their signature musical arsenal; chock full of flare, off-beat humor and over-the-top nostalgia. Such a feat has been epitomized via the dual efforts of firearm-bearing Scott Baker (lead vocals, rhythm guitar) and axeman Greg Murphy (backing vocals, lead guitar). The band’s concept is novel in the world of modern progressive music: a Super Sentai-inspired team fueled by a broad but understandable goal—to save the world. Whereas Bansheeface capped a conceptual epic rooted as far back as 2008, Enter the Sentai sees that spectacle given even larger life.

In fact, I’d go so far to consider Enter the Sentai the band’s first real album. Besides its title effectively marking a clean slate, the cover art (courtesy of Kishor Haulenbeek) commands attention to a much larger degree. Yes, the campy ‘good versus evil’ nature about it is established. However, its manner of portrayal is utilized by way of fine detail, particularly in its shadowing and bold, vibrant colors. For reference, while the first album’s artwork was of a villain reminiscent of the Power Rangers universe, this cover is defined much more clearly. Provided I was sold on that alone, I’m certain countless other listeners would be in the same way. In terms of album pacing and stylistic consistency, there is also definite improvement. “Intro the Sentai” opens the album in a short, trailer-style structure, which sets an opportune catalyst for upcoming action. Distant civilian chatter forms the base of the track. Overtop of it, an initially muffled mass of distortion seeps its way into the mix, eventually gaining clarity. I found its use effective as it persistently hangs on, but the kicker is in the track’s remaining few seconds—a false start, followed by silence, only to get back into gear. The transition into the title track was a smooth one. Just listening to those opening riffs on deep, tribal percussion, my outlook was already positive. I made note of how the harmonics of the bass and guitar complemented one another as the melodies progressed, in a seamless traverse from metal to alternative and back. Baker’s vocal delivery fluctuates from stationary to soaring, all the while keeping steady harmony alongside Murphy. Their combined deliver undergoes several mutations all within a single verse, and convey the prime importance of morphing when fending off evil. What made this especially effective, though, was the duo’s sensible implementation of dynamics, which made each of the song’s phased. Next up is the cheekily titled “Desert Dessert,” set in a foundation of reverb and rhythmic experimentation. Even so, its presentation is decidedly hookier, given its emphasis on intricate, yet interestingly straightforward arrangements that work well with the pacing of the vocals. Considering such distinctive qualities, it may as well make a strong single release.

From the midpoint of the album, “Adaptive Manipulator” fares competently on a similar principle. This song had actually taken me by surprise at first. I was unsure what direction it would take in its beginning with a double bass drive and unison vocals, but by the chorus, I was won over. The simple and direct way in which it’s presented accounted for half its charm, while the other was based on making the vocals and guitar melodies play off each other. Once the temple slows at around 1:50, though, that’s when the song starts to showcase its fullest capabilities of melodic execution. Its clean chord arrangements exude a poignancy that unifies all of its elements together, especially as the sustained open bottom B an E strings are played. I’ve always felt something about those bottom two open strings; they provide an authentic sense of richness that allows chords to sound full, without any extra exerted force. And much to my pleasant surprise, the song became even better when progressing further. Listen to how the synthesizer melodies interaction with the overdriven chords in order to fully appreciate its greatness. For those seeking something on the extreme side of the spectrum, “Belle of the Cabal” is as heavy as it gets. There’s a distinct Yank Crime-era Drive Like Jehu vibe in its intensity, mostly comprising the verses. In the wider scheme of things, envision a post-hardcore chaos combined with the flamboyant virtuosity of Queen, almost Mighty Morphin’ pacing. Baker’s vocals may seem a little too caught in these exorbitant elements, but every tempo shift gives them greater leverage and a more nuanced delivery, whether clean or harsh. Once again, the band showcases immense involvement in “The Man-The Mill-The Machine,” another otherwise conventional, straightforward rocker. Its interplay between lead melodies and bass groves is definitely admirable. But on an interesting note, the thematic focus—centering on a burning spirit longing to escape a constricting oppression is the easiest understood. A fair amount of buildup comprises each instrumental break, which directs prominent focus to the attack aspect of the mix. The song’s bridge brings its heaviness to a halt, and through Baker’s introspective and uplifting manner, retains the general mood. “Baron Wasteland,” the penultimate track, features a dominant harmonic lead that works much to its benefit. I liked the aquatic aesthetic of the vocals during the pre-chorus, having been saturated in reverb, chorus, and flange. At the base is a somewhat percussive strumming with emphasis on every fourth beat, which greatly enhances its hook factor. The same can be said about the chorus, of the direct and grungy variety while still surrounded by intricate leads. Baker also uses more of his stationary range in the latter part of the song—a fine, refreshing touch in the least. On “Warewolf Casey”, the album’s closer, all is put into place. While there isn’t any particularly daring instrumental implementation in the way of carrying a grand finale of sorts, it doesn’t have to. This is the song that got me interested in the band, like it will for the expansion of newcomers to their music. How the drums and melodic aesthetics of the guitars play off one another truly justifies its being the album’s carrier single; I’m certain that several other songs will also fare similarly as viable singles once the album is released

Overall, Enter the Sentai is the album that had to happen. Lush production values, tighter pacing, and a much better focused instrumental and conceptual path are the key elements the band needed to advance, and ultimately, they succeeded. Heavy music fans may find Pseudo/Sentai lyrically—even stylistically—alien in some aspects. But here’s the truth: you do not have to be a fan of Super Sentai, Power Rangers, or any tokusatsu series for that matter, in order to appreciate the band’s merit. Simply try something new!

I come from a family who is passionate about all things music. I learned to sing at an early age, and by 13, had my very own Fender Strat guitar. I tried my hardest at learning all that I could. Because I was born with cerebral palsy, I had to teach myself an adaptive playing style. I learned to write and record my own music, despite these difficulties. In college, I started making great use of my writing abilities by reviewing music, as well as copy editing. I guess it's best to stick with what you know, while welcoming a fair challenge at the same time.
Previous Gallery: State Champs at Rock ‘n Derby in Schaghticoke, NY 05/21/2016
Next Ecclesiast Announce EP & Release Debut Single “High Horse”