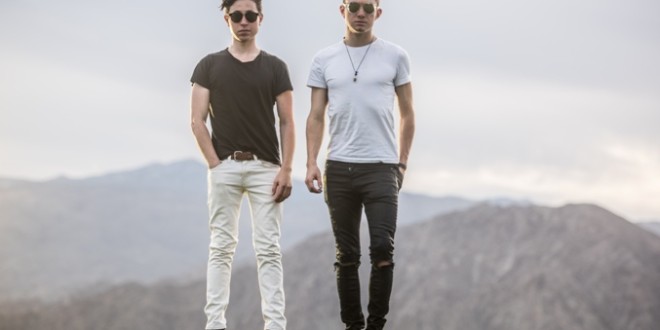 In addition to their expanding presence on this year’s festival circuit, STRANGERS YOU KNOW have announced a slew of tour dates that’ll take the indie pop/folk/electro duo to U.S. clubs this spring supporting Swim Deep and Vista Kicks, with a handful of headlining shows as well.

STRANGERS YOU KNOW–supporting their LOOSEN UP THE LEASH EP and single “Used”–will make their way across the country stopping in such cities as Portland, Seattle, Minneapolis, St. Louis, Chicago, Boston, New York, Charlotte,Atlanta, Nashville and Cleveland. In NYC, they’ll perform Saturday, June 18 at The Studio at Webster Hall, following their performance at the Firefly Music Festival earlier that day.

The performance at Firefly is just one of many festival appearances for the Southern California-based group this year, which began at SXSW at The GRAMMY Museum’s official “Homegrown: Los Angeles” showcase. STRANGERS YOU KNOW then made their debut at the Coachella Valley Music and Arts Festival, the very festival where Grady Lee (vocals, guitar) and Adam Haagen (piano, guitar, vocals, banjo, mandolin) met by happenstance three years ago as attendees of the iconic event. Following Coachella, the group headed to Louisville to perform at the Kentucky Derby Festival supporting Cold War Kids and Alabama this past weekend for their debut at the Hangout Music Festival. Next up, the band performs at BottleRock Napa Valley this Saturday, May 28 from 1:00-1:45pm on the Lagunitas Stage. STRANGERS YOU KNOW has also been added to the lineup of Milwaukee’s Summerfest for Friday, July 1 performing at 4:15pm on the Johnson Controls World Sound Stage with Blue Moon and 88Nine Radio Milwaukee prior to Taylor Dayne as well as Seattle’s Bumbershoot Festival taking place September 2-4. See below for full list of upcoming tour dates.

STRANGERS YOU KNOW released their LOOSEN UP THE LEASH EP on March 11. The six-track album first premiered with FUSE, who said, “the L.A.-based indie-pop/folk outfit should solidify its staying power with a new EP, Loosen Up the Leash…centered around lead single ‘Used’ that amplifies a bluesy, folk sound catered for a live arena.” Additionally, the band partnered with TEEN VOUGE to premiere the official video for “Used,” who raved that the song, “…features a stealthy beat and a rhythm that will transport you to the fields of Coachella.” Watch the official music video for “Used” here. The single has seen support from SiriusXM’s AltNation, featuring it on their Advanced Placement show, as well as Spotify and LA’s Alt987fm, who is currently featuring STRANGERS YOU KNOW as their May Artist In Residence.

The group recently sat down for a Q&A with NYLON, who premiered a live Jam In the Van version of “Used” and described their live sets as “upbeat and infectiously good–exactly what a festival setting needs–and strong enough to make a lasting mark on fresh ears.” STRANGERS YOU KNOW also paid a visit to the YOUNG HOLLYWOOD studio in between their Coachella weekend performances for an interview and some fun and games.

Catch STRANGERS YOU KNOW in the following cities: