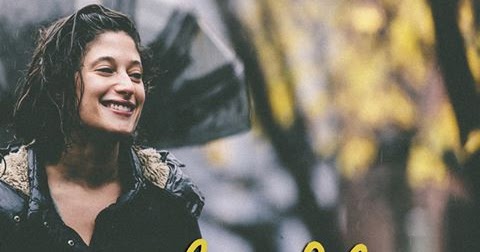 South African born singer/songwriter Jeri Silverman opted to keep things simple for her EP Leaflike, but the heavy lifting to make it happen fell to her. Silverman’s work ethic and clear-eyed artistic vision compelled her to handle the arranging and writing in its entirety while singing lead vocals and playing acoustic guitar. The band joining her on this collection is rounded out by Adam Christgau on drums and Dan Romer on bass and any additional instrumentation outside of that is handled by the band, usually Silverman, as well. This is an album that sounds like it was made a long, long away from the African skylines of Silverman’s youth – instead, her adopted home of New York City bleeds over into the music and gives each track sharp, urban focus. This is a performer with songs that won’t waste your time.

“Anywhere But Here” opens the release with brief, but sparkling piano runs that seems to lock into each other and spiral upwards. Synthesizer sounds add ambient color to the piece, but it’s never overstated. Silverman’s lyrics and vocal delivery work in perfect sympathy with one another and her instinctual understanding of how to best put over her words extends to a skill for wrapping her words around the music for maximum effect. Her dark lyrics take an even darker turn on the next track, “G&A”. The scale of personal dissolution grows even larger – it isn’t just mundane despair, like heard on the first track, but instead we are given a glimpse of impending total breakdown. The fall of the individual is equated with the fall of the world as a whole. The warm and luxuriously moving electronica backing track gives listeners an interesting juxtaposition.

“The Fever” is another superb lyric married to another understated backing track. The notable difference here, musically, is that Silverman chooses to punctuate the song more with guitar. Her fluency on the instrument belies her comparative youth; Silverman, like in her songwriting, has the touch and discernment of a much older soul. “Rabbit” expands on the guitar work evidenced in the preceding song. This is a song that you can take any number of ways; it’s easiest, perhaps, to hear it as a song about sexual politics, but Silverman brings a world-weary resignation to it that cuts into listener’s emotions. “Dreams” is an unexpected cover of the venerable Fleetwood Mac classic. Silverman wisely chooses to not ape Nicks’ legendary vocal and, instead, slithers through the lines with a slightly sultry air. The EP’s final song is the title track. This brings the best of disparate songs like “G&A” and “Rabbit” under one musical roof and strikes an entertaining balance between both aesthetics.

Jeri Silverman has a lot of growing to do, but she already comes across as a finished talent in many respects. There’s no sophomoric clichés here, no overwrought moments, or gross missteps. Leaflike is solid from first song to last and, occasionally, scales impressive peaks. Releases like this have a habit of flying under the radar, but the talent here burns so bright that missing it would be a shame.