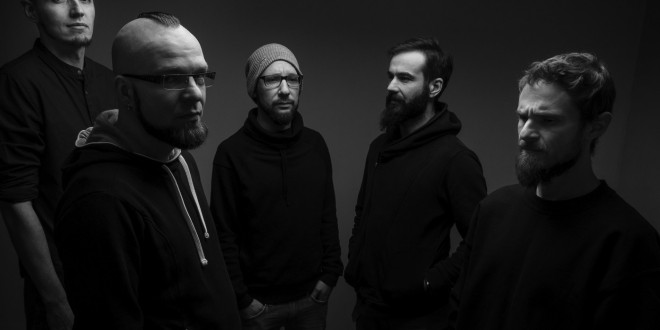 EP Review: Vidian – A Piece of the End

Vidian dropped a four-track EP today (May 25th) via Arachnophobia Records following 2015’s Transgressing the Horizon. Titled A Piece of the End, the EP declares that not only is this Polish quintet unafraid of experimentation, they welcome it.

As a whole, A Piece of the End represents a sludge-, noise rock-, or even punk-influenced brand of death metal, although this description itself lacks the gloomy atmosphere hovering throughout the piece.

The first track, “Constellation” starts with an atmospheric introduction later woven with snippets of drums and chords before building into a winding background. Should one close their eyes, it’s easy to envision the music leading them deeper and deeper into the rabbit hole (acid trip not required). This feeling is further guided by Szymon Brążkiewicz’s vocals—which meet partway between cleans and shouts, and carry a decent amount of emotion—as they rise and fall with the song’s many tempo changes.

Next, the instrumental “Distorted” builds upon the woe of the prior track in a hauntingly seductive manner. It could easily accompany a movie scene involving a foggy horseback ride through the forest to a dilapidated castle. While an interesting piece of minimalism, it does seem odd for “Distorted” to not be the introductory portion of a track with vocals given the EP’s size.

This build-up leads straight into “Pole Shift,” which consists of a tribal beat and dancing chords that play with timing. Brążkiewicz begins the track with light whispers before breaking into powerful screams, contributing to a tension that ebbs and flows from the very beginning of the track. It’s almost as if through these shifting guitars and vocals, the quintet is able to take the listener from a point of sheer catharsis to one of inward-facing aggression, and back again.

Title track, “A Piece of the End” rounds out the EP with chaotic crescendos tied to lyrics presenting what seems to be an internal war of wanting to live or die. Partway through, the song breaks into instrumentals reminiscent of “Distorted,” while a woman speaks in the background—further building on this idea of walking the line between the two cornerstones of existence. Case in point, the lyrics, “I have revealed a piece of the end / I’ve seen it, I’ve touched it / I’ve backed away in fear / But my curiosity tells me to keep going back / To scrape off further layers” seem to describe the turbulent path of survival.

Ultimately, Vidian’s A Piece of the End reminds this reviewer of the pain, confusion, and turmoil inherent of living through and casting off the shackles of depression. The band succeeds in casting a melancholic layer over each track, which also seem intentionally suffocating in well-chosen places. It’s an experiment, and one well worth a listen for those looking for something a little different.