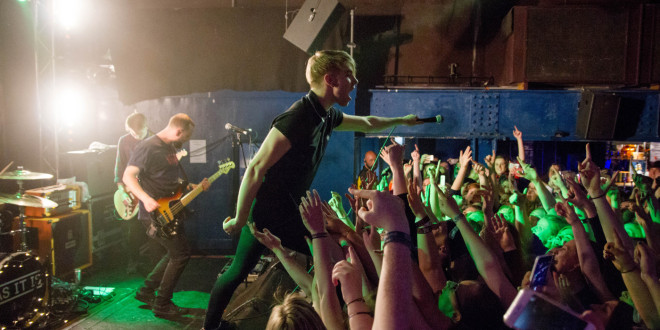 I can say I think the travel down to Newcastle for the 11th of my As It Is shows was worth every moment of stress and spending the night finding out about the cities night life circumstantially. I was not disappointed by any of the bands on the bill and my first impressions of support Jule Vera was very high, the lead singer Ainsley had a very chilled, relaxed vibe about her and it was reflected in the music, their songs were catchy, fun and energetic. I found myself able to dance along and just enjoy the band, the music and the atmosphere they created while they played. But something about this band I loved was energy they had, they were non-stop and it reflected when they played, the passion was just intense. If you were to ask anyone at that show one thing that stood out about Jule Vera, would be their incredible drum performances throughout the set, the first time, a floor tom was brought out, it bathed in little led lights and the drummer took position at it and began to just

absolutely blow the audience away with his skill, Ainsley had hold of a snare and was giving it to fans in the crowd to hold while she drummed along. This was only the warm up for it so to speak because at the end of the set, two floor toms and two snares were brought out and again the drummer and the lead singer began an incredible almost routine like drum performance, where you could feel the beat in your chest, you just knew they loved what they were doing, the guitarist was using his guitar pick up almost as a microphone, I had never seen it being done before and I was incredible impressed by it and the whole band just really got everyone hyped up.

The Aussie boys in With Confidence were next and the minute they stepped on stage I was more than a little in love with the absolutely stunning guitarist Luke, the bands whole feel was just pure pop-punk, the hair, the skinny jeans and not to mention the music. Imagine if Sum 41 and Simple Plan had a child on Warped Tour and fed it pizza. That is With Confidence and I absolutely loved every minute of it, the crowd jumped so much that you could actually feel the floor shake with the sheer force of it. They just filled the tiny room with this amazing vibe and I couldn’t stop myself from singing at the top of my lungs and having a cheeky wee dance to myself as well. The crowd even got a cheeky little shower when Luke decided to spit water all over the crowd and not a single person complained because it was very refreshing.

I knew a few songs of theirs so when they played their song Godzilla I lost it, I just got so lost in the music and the energy that I had this feeling of happiness because they brought so much of that with them in there performance.

Now I didn’t expect anything less than perfection from the boys in As It Is, every show of theirs I’ve been to whether they have played to 20 kids in a room or nearly 200, they never put on bad show and this one was no different, coming out to their signature Speak Soft, the place was instantly off their feet from the first beats of the song and I have always said I never feel more at home than when I’m at one of their shows and it’s true, that sense of all being there for the same reason, feeling like a family, it’s amazing. The set list was just perfect and when they played their newest track Winters Weather it was amazing to hear it live for the first time and I wasn’t disappointed because truthfully the song was so much more powerful live. When they started to play some older stuff I got really excited because even though their new album is absolutely incredible the old EP This Mind Of Mine is one of my favourite musical releases and it was amazing to finally hear their track Relive The Story again after almost two years and I will not hesitate to say I got more than a little emotional because the song is so beautiful and its just the same, if not better, than I remember it and it put in perspective to me how far their band have come, musically and how much their fan base has grown as well.

By about 6 songs in I could already feel the sweat pouring off me and I wasn’t even in the heart of the crowd but it did look like the place to be. The whole floor was bouncing and they were just so rowdy. I have to give a special mention to guitarist Ben, who through the whole night had the most amazing vocals, some of the best I’ve heard them. A particular moment that actually took my breath away was during Can’t Save Myself when Ben just screamed the words, think I had a little bit of a fangirly moment to myself. Mr Patty Walters has to be the king of audience participation, the boy is constantly right down at the crown, letting fans sing and making an amazing amount of eye contact and

I think that little bit of extra effort he puts into preforming really makes the fans experience 10x better because that personal contact with the band just makes your night.

As It Is have this way of just making you feel like you’re family, like you’re part of this incredible performance, their stage presence is like no other band I’ve seen before, the sheer, time, energy and love they put into preforming is so apparent at their shows because you can tell they love what they do and they have a passion for playing shows and meeting fans. For the first ever Patty played You The Room and The Devil On Your Shoulder and to say I was sobbing was a little bit of an understatement, Patty gave a speech telling us about how he wrote it during a time in his life when he was down and out and reminded everyone that no matter how bad things get, they will always be better, it reminds me of something he said before: “I urge you to treasure your naivety and stupidity and to truly live before you die” and it was such a beautiful way to start such a beautiful song and a beautiful way to finish before the encore.

Now their encore was like a strategic plan of action, playing their 3 biggest songs, Concrete, Cheapshots and Setbacks and Dial Tones, I don’t quite think the crowd were ready for the sheer energy that came with the final three, not a single moment was spent on my feet, I was singing my heart out and just loving every single second of their performance.

Dial Tones may not be my favourite song but it will always hold a special place for me because it will always be an iconic performance and Patty just proved this by surprising the fans and touring photographer Ian when he jumped into the crowd and had a nice wee crowd surf to himself. It was one of the best moments of that gig and I was left feeling so buzzing and so excited that I just wanted to do it all over again, so with all that, I left the gig truly thinking, who the fuck is Patty Walters?

PHOTO GALLERIES:
Jule Vera
With Confidence
As It Is