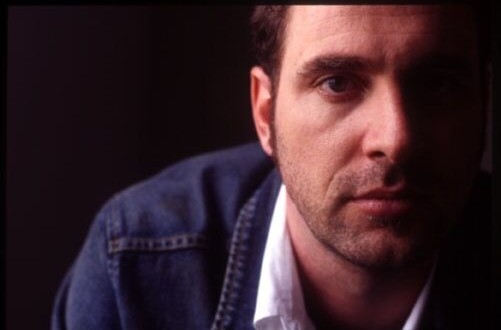 Eric Anders Big World Abide is a compilation of the best from the artist himself. With twelve tracks taken from various different albums, this one LP is everything you need if you want to become familiar with Anders sound.

The record kicks off with “Tethered to the Ground” which when begins is reminiscent of Bush’s Glycerine. With that same haunting 90s alternative instrumentation, Anders voice cuts across as quite crisp and this contrast brings some weight to the tune. It feels like the type of song one would hear playing in the background of a television drama, and that is nothing but a compliment. Most of Anders tunes have this same kind of vibe, but with that 90s early 2000s sound it helps set Anders apart from other current artists. The song itself is especially haunting as Anders sings “tethered to the ground/but I’m reelin’ from it/cause I know what can’t be found/as I’m headed for it” and it makes it a track that is very relatable. It’s the best original tune to be found on the LP and rightly earns that first spot on the record.

“These People” has more of a smoky sense to it and one can almost picture Anders crooning it to a hazy bar filled room. It’s quiet and gentle but don’t let that fool you, the topic is actually quite sentimental and thought provoking, asking the question of will anyone be remembered for the things they did after they are gone. Anders specifically points out the people who have helped him singing “the people who saved my life/mostly women but none a wife/my sisters mainly have helped me to get by/Oh I can’t imagine life without them” which will strike a chord with some listeners. But no matter who the exact people are to the listeners, Anders makes sure to state that the people who gave him life “lived in color not in black and white” and that is a line that will stick with his audience long after the song is finished. There is much to think about while hearing this song, and while it could be construed as a bit bleak, this reviewer can’t help but be uplifted by the hope of being remembered.

A mysterious vibe takes over “Looking Forward to your Fall” and it carries on throughout the entire track. Anders vocals are sultry and full of soul and with the use of strings in the instrumentation they only enhance the overall production of the tune and intensify Anders performance. He has an easy voice to listen to which is displayed on every track on the LP but the frantic strings really suit his sound nicely and help bring the song to life in a more vivid picture. If you’re looking for a little something different out of Anders “Looking Forward to your Fall” is a song to turn up.

The absolute highlight of the entire LP is Anders “cover” of The Violent Femmes “Blister in the Sun.” It’s hard to know whether to classify it as a true cover as Anders changes many of the words to suit him, but the melody and that showstopping chorus are still there. And while Anders slows down the manic tempo of the original making it undeniably and beautifully melancholy, and the song for the most part is recognizable by the time the chorus rolls around, listeners will do a double take realizing this song isn’t an Anders original. The risks that Anders takes here pay off in spades. He makes it his own haunting version and it is nothing short of a masterpiece. Completely transformed from what The Violent Femmes released into the world, Anders shows that rearranging a song in the right way can lead to a spectacular outcome.

Though the album is cohesive for a best of record, there are some songs that are just not up to par with the rest of the collection. “Settlin’ Comes” is a good song, but its percussion doesn’t gel with Anders voice and while going out of his comfort zone is something to be appreciated it doesn’t quite work with the song. “Genocide and Justice” comes off more as a country song and by telling someone else’s story and not his own Anders loses some of his magic. “How Low and Why” covers a very important topic of race but its content doesn’t match with the rest of the album, even though it is executed well by Anders.

Overall Big World Abide is a satisfying collection of songs all in one record that encompass what Anders has to offer to the world as a musician and is recommended to both new and old fans.

retro music enthusiast. Dreamer. Kind of odd. Writer
@twitter.com/for_no_one1014
Previous Show Review: As It Is, With Confidence, Jule Vera Newcastle 02 Academy 20.05.16
Next GALLERY: EXPLOSIONS IN THE SKY AT SHAKY KNEES IN ATLANTA, GA 5/15/2016