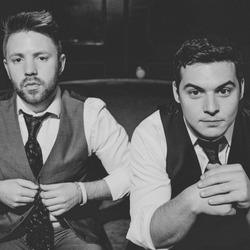 The synthesizer and percussion led charge of Broke Royals’ music goes beyond mere pop or light rock. It uses the most memorable elements from those respective styles, namely melody and energetic tempos, but the discernment required to enhance such inherently simple songs into condensed and musically memorable soundscapes speaks about the band’s own musical vision. Philip Basnight and Colin Cross constitute Broke Royals and the clarity at the heart of their music is rather astonishing considering it’s merely two men responsible for all of this and that they’ve produced three EPs since their 2014 formation. No one can accuse this musical partnership of laziness or lack of ambition. It’s a statement of purpose to open your recording career with a multi-part conceptual work and the third installment in this mini opus, The Luxury of Time Pt. Three, represents the duo’s most substantive achievement yet.

It opens auspiciously with “On Your Own”, a rousing big-screen pop rock number with inspiring lyrics and ear-catching harmonies that make it impossible to ignore. The first song, likewise, gives listeners a taste of the duo’s love for synthesizer accompaniment, but unlike other artists who unsuccessfully attempt mixing electronica with smatterings of rock music, Broke Royals has a clear sense of how to weigh the scales in an effective, judicious way. The uptempo “New Suns” relies on the same keyboard surfaces, but the drumming is busier here and certainly hits much harder than before. Colin Cross proves his mettle throughout as one of the most promising newcomers behind the kit in recent memory. He is, like his partner, a multi-instrumentalist and the duo’s fluency on a number of instruments makes an inestimable impact on the EP’s quality. “Young Tigers” doesn’t deviate much from the course set by the two preceding songs besides failing to match the same urgency found in the earlier tracks. Perhaps this might have been a misstep under alternate contexts, but here it shows Broke Royals are quite skilled at gauging how their work should unfold.

“Love, Youth, & Glory” rates as one of the release’s peak moments and powers its way there on the backs of genuine sentiment and another sterling arrangement. The endless invention springing from this duo is uniquely sympathetic to each other and, frankly, listening to the songs drives the point home that Basnight and Cross surely work closely together to bring their musical goals off so well. “Heartless Come Around” is their EP’s final track and an unsurprising personification of their approach. The duo wisely never attempts biting off anymore than they can chew and, instead, offers one of the EP’s most fully rendered fusions of synthesizer textures with pop rock strains. The Luxury of Time Part Three’s last track, “Outro”, is an instrumental that wraps the collection up nicely. It has a lightly progressive slant but never abandons the melody-first aesthetic guiding the duo’s songwriting.

This is a singular release, informed by their past and present alike, but with a distinctive sonic signature quite unlike many units performing today. The Luxury of Time Pt. 3 appears to be the final entry in the duo’s conceptual work and should be judged both as an individual release as well as part of a larger scheme. These songs do stand on their own quite well and point the way towards a brilliant future for these Washington D.C. based musicians.