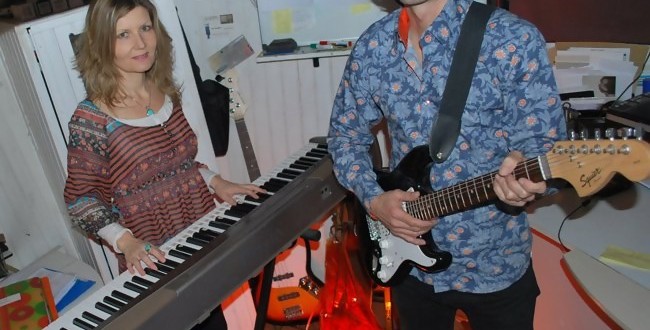 Secret Season – Love is the Only Game in Town

Secret Season – Love is the Only Game in Town

This exceptional intermingling of musical influences will leave its mark on many. Mark Moogalian and Isabelle Risacher are sole members of the Anglo/Franco duo Secret Season and their fourth album, Love is the Only Game in Town, is quite unlike the vast majority of guitar-oriented songwriting to emerge in recent memory. American born guitarist and songwriter Moogalian, a native of Richmond Virginia, chose the ex-pat life in the nineties and settled in France where he later met Risacher, a singer and writer. They quickly struck up a creative partnership and their debut album, 2011’s On Our Own, demonstrated the possible fruits of two artists well versed in a variety of musical schools and blessed with a fearlessness of intent. The latest album is a twelve song effort furthering solidifying their claim as one of the most intelligent indie alt rock acts working today.

They waste no time making a positive impression here. The title song begins Love is the Only Game in Town with style and understated ambition to burn. Moogalian has quite a distinctive guitar attack that’s, more or less, impossible to exactly replicate and it surrounds each song with an enriching consistency. The lyrical content is image driven, but it never veers into inaccessibility and gains much from Moogalian’s superior delivery. The second song “She’s So Mysterious” sports some of the same cosmopolitan musical textures, but the presence of guitars weighs heavier without ever undercutting its melodic content. Risacher takes over vocals on “Show Me What You’ve Got”. Her plaintive, emotive vocals play off well against the rough-hewn arrangement, particularly the raw and muscular drumming. “When I Saw Jesus” is written in a similar vein with assertive drumming and snarling, reverb soaked guitars. There’s a slightly skewed blues aesthetic driving these sorts of motifs, but the source of the skewing is deceptive. It isn’t that Moogalian has any extraordinary approach to the genre, but instead, he understands stylistic affectations can produce similar effects. The sharp twang often defining his guitar lines has an underrated vocal quality.

Many of the same guitar effects are present in “Linen White”, but the arrangement makes superb use of space and has an understated finesse missing from the previous two songs. The lyrical content here, as elsewhere, is quite sharp and manages to straddle a line between personal moments, deference to traditional songwriting themes and formulas, and universality. “Mean Streak” has its tongue inching towards the singer’s cheek, but it’s akin to the customary use of humor in blues – the performer is poking fun to keep from crying. Risacher turns in a first rate pop vocal on “When You’ve Gone” that, nevertheless, retains a deep emotional center. Some listeners may not expect the duo to have such vocal prowess and, while these are virtuosic singing talents, they completely inhabit the album’s songs. The track’s bass line is the indisputable musical highlight – it takes unexpected twists throughout and enlivens what might have otherwise been a rather staid tune.

Love is the Only Game in Town ends with “Shine On”, a slinking and atmospheric mood piece whose arrangement and instrumental voices belie the implied promise of the title. Moogalian’s hushed vocal brings the album to a thoughtful and careful close. It’s quite an effort and no two songs sound alike. Make no mistake, however, that there’s tremendous consistency here – Moogalian and Rischer’s songwriting is quite simpatico with each other and Love is the Only Game in Town hangs together as an unified work.