Home / Photography / Gallery and Review: American Authors at The Barbary on 5-12-2016 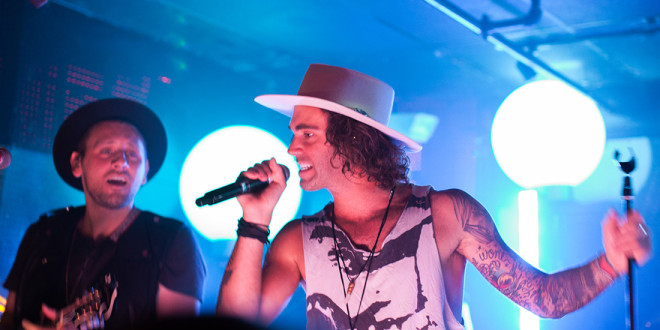 Gallery and Review: American Authors at The Barbary on 5-12-2016

It’s safe to say that those lucky enough to score a ticket to American Author’s show at The Barbary were having the best day of their lives. Thankfully, I was one of those people in the intimate venue, about 2 feet away from the stage. The Brooklyn based band decided to get back to their roots and play at one of the venues they had played early on in their careers. It was an absolute blast!

The energy of the room was on 10 from the very first song. It only went up from there when they previewed a song called “Right Here, Right Now” from their new album to be released on July 1. Zac, the lead singer, jumped down into the audience and led the crowd in a sing a long. I personally loved the title track from the soon to be released album called “What We Live For”. Zac explained that the new album is about where they are in their lives now and the adventures they are still going on.

They went on to play staples from their first album and even did a cover version of Walk the Moon’s “Shut Up and Dance”.  Of course, everyone in the place went nuts when they played their hit song, “Best Day of Our Lives”. They ended the show with the title track from their first album called, “Oh What a Life”. The song has a very Celtic sound to it and at the end as we chanted, “And we laughed, Oh, and we cried and thought Oh what a Life!” it reminded me of being in a bar in Dublin.

Here are some highlights from the show.

I’m grateful I got to see these guys perform at such a cool small venue because I’m sure after their next album comes out and they head out on tour, they’ll be back to the large venues.
Pre-order their album.

Go see them perform live near you.

Fun Loving Music Photographer and lover of live music in general. I am most likely to be spotted with a coffee in one hand and a camera in the other, somewhere in Philadelphia, New York City and everywhere in between. For more of my music photos: http://myphotos.bellemorephotography.com/
@bellemorephoto
Previous ROCK’N DERBY Set Times Announced
Next INTERVIEW WITH BLEEKER