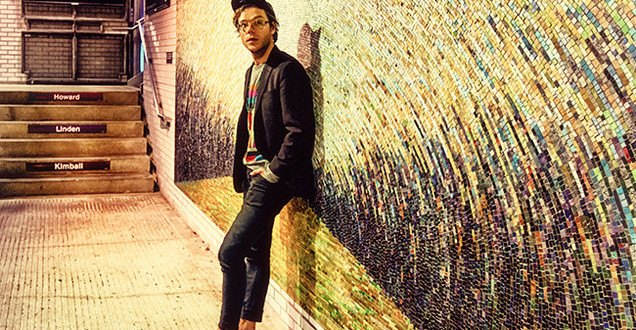 Christopher the Conquered has released I’m Giving Up on Rock & Roll, and while it isn’t as solid of a release as his previous EP (the album leaves out the retro infused “God Plays the Saxophone” and the spectacular solo version of “I’m Not That Famous Yet”) it is still a magical ride to be musically taken on.

The title track gets the record started off right bursting with electric energy and a choir of voices that share some resemblance to the type of music Queen put out. When the song turns to just the piano and Christopher singing soulfully, it brings an interesting shift and dynamic to the tune. “I’ll never sing again to try to make you want me or convince you I could be your savior,” Christopher sings gently but with also a quiet sort of power. Horns are brought in to add a little more funk and it all adds up to produce an epic feeling to the track that really takes off as the tune reaches its climax. It’s a great kickoff to the album, and one of the absolute highlights of the entire LP.

“I Lose It,” begins with a magical piano introduction and crashing percussion that set up the tune perfectly. When Christopher starts to wail it is impossible not to get sucked in by his storytelling charms. “I looked for love most everywhere/I’ve checked right here and over there/And every time I think it’s mine I lose it,” he sings with such a fragility and vulnerability that it elevates a simple song about coming up short in love to the best track on the record. It’s painfully honest, the use of horns perfectly capturing the feeling of loneliness, and it will be able to connect with many listeners. Halfway through, as the song becomes more soulful and grand, it takes on a Leonard Cohen “Hallelujah” feel which fits the tune so well and by the close of the track don’t be surprised if you find yourself shedding some tears.

One of the songs that crossed over from the EP to LP is “What’s The Name of the Town” and it still remains a shining moment on Christopher’s full length work. It has a retro 70s vibe that works very well for the artist and is also the most radio friendly song on the album. With a charming melody, and a delightful piano instrumentation, it sets the stage for a soulful pop vocal performance by Christopher as he tries to remember the town he spent time in the night before. Strings swell on the chorus rounding out the sound, and by naming so many different places the town could be, it is like a celebration of the of the United States and that itself is a thing of beauty.

The non solo version of “I’m Not That Famous Yet” appears at the end of the album, and while nothing too drastic has changed, it now has a backbeat and some other instrumentation instead of just a piano, it somehow looses a bit of its magic. The previous version was completely raw and intimate and felt like Christopher was singing right to you, performing in your living room. This version is still great as Christopher delivers another soulful vocal performance that guts ones soul, but the song is just better served as a stripped down piece.

Elsewhere on the album “Mystery” is a bit too repetitive, the mostly pleasing “I Guess My Heart’s Out of Tune Again” drags on too long at over five minutes, and the quirky “Everybody Rains” just feels out of place in context with the rest of the album.

Still, Christopher the Conquered has released a pretty solid LP, and more importantly is showcasing what a powerful singer and songwriter he is, ready to take the musical world by storm.