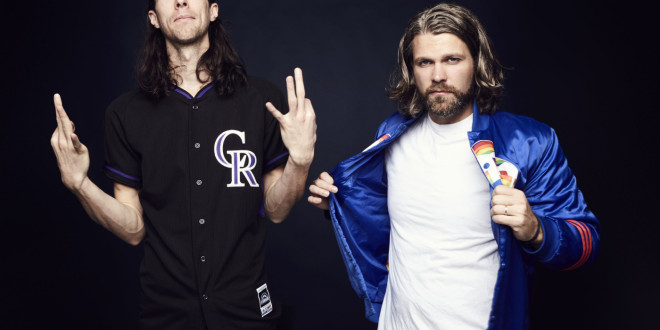 When it comes to a band such as 3OH!3, only one word comes to mind: party.

3OH!3 are best known for their 2008 singles “Don’t Trust Me” and “Starstrukk.” Now, three years later after their fourth studio album, Omens, 3OH!3 are back with NIGHT SPORTS.

For Night Sports, Sean Foreman and Nathaniel Motte decided to return to their roots and write and self-produced their album. The evolution and growth both musically and lyrically from their 2008 album Want to NIGHT SPORTS, is impressive and will undoubtedly be appreciated and acknowledged by critics. The production quality throughout the album is impressive, 3OH!3 managing to make each track strong enough to stand on its own, unlike other trap-genre oriented artists who have a collection of songs that all sound repetitive.

The first track in NIGHT SPORTS, titled “Fire In The Heavens,” serves as an introduction to the “new” 3OH!3 for listeners, combining elements from their previous albums and introducing elements from the rest of their new album. “Hear Me Now” follows after, emerging listeners into 3OH!3’s unique sound — a mixture of trap beats, rap vocals, and eccentric instruments resulting in a catchy beat.

Throughout the album, 3OH!3 display their musical influences in various tracks. With “Freak Your Mind,” certain portions of the track sound similar to The Weeknd, while other portions are reminiscent of 2015-era Justin Bieber. Meanwhile, “Give Me Something to Remember” serves as the typical tender track off an album, sounding similar to Bastille and Calvin Harris. Yet, through all these influences, 3OH!3 remains true to their raunchy selves. “BASMF” serves as an anthem with relentless lyrics calling out haters, and “My Dick” serves as a humorous track that has beats worthy enough to be played in mainstream clubs.

After 10 unique, well produced tracks, the album comes to a finale with “Hologram.” This track seamlessly combines elements from each song on the album, mixing different aspects without overloading the listener’s senses.

Overall, in NIGHT SPORTS 3OH!3 has managed to make themselves more professional and complete in their sound, marking their spot in the industry.