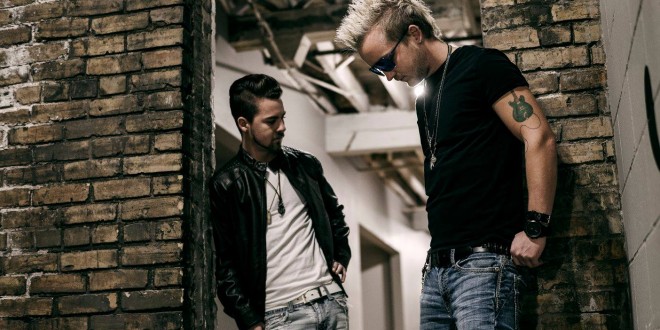 Version 5 – Take you There

Version 5 – Take you There

Version 5 is back at it with a three-song EP that, while it might be lacking in number of songs, makes up for with the intensity and production of each individual track. The EP, which arrives just in time for listeners to get acclimated to the sound before the band’s May 27th show in Minneapolis, where they’ll be opening up for Blue Felix, is a nice complement to their previous work. This EP shows that production quality and listener-friendly music doesn’t have to be exclusively an LP experience.
The EP opens with lead single “Why Don’t You Drop,” a genuinely sing-able opener that matches the intensity of, say, a Rob Zombie track in his prime, but with a catchy chorus and refrain that will surely have fans singing along word-for-word when Version 5 busts this one out on stage. “Why don’t you drop? Why don’t you drop me? Why don’t you pull the pin and drop that bomb on me?” the band asks their presumed captor or controller, before revealing at the end of the chorus it’s actually “the violence you can see in me” that seems to be the source of the consternation. This track sets the EP off on an incredibly energetic path, and frankly, it doesn’t lose steam from there.
The next track is the faster-paced “Bury You”, which picks up the pace a little bit before slowing down to half-time in the chorus. “Sick and tired of being used / you picked the bomb with the shortest fuse” is one of the most powerful lines of this song, and it sets the tone for the perspective Version 5 has here: the energy, the anger, is about to boil over, and patience is an absolute virtue—and rarity—at this point. Impending violence, coupled with either explosion or implosion, seems imminent here. The slowed-down chorus will undoubtedly be a head-banger when it’s presented live.

The last track on this trio of new pieces, “Take You There,” is undoubtedly the most experimental of the three, not to mention the most laid-back. But lest we be mistaken, “laid-back” is relative when it comes to Version 5. The band is so high-energy that even this more down-tempo, softer song is hardly devoid of energy. “You will drown, so safe and sound,” they croon before the chorus, which indicates a strangely, and perhaps hauntingly, romantic affair here. The target of the song is obviously a deep love, and in true Version 5 fashion, the emotions are conveyed in a darkly melodic—and, relatively sweet—way. An intense yet satisfying finish to this small EP, for sure.
Again, it’s a small package, but as it arrives here at the beginning of the summer, these will be three songs that are going to stick in the craw of devout Version 5 listeners, and will surely get some newcomers on the bandwagon as well. We’re eager to hear about the rest of the band’s tour dates as we enter the warmer months, and are certain that the new Take You There EP will be in heavy rotation.