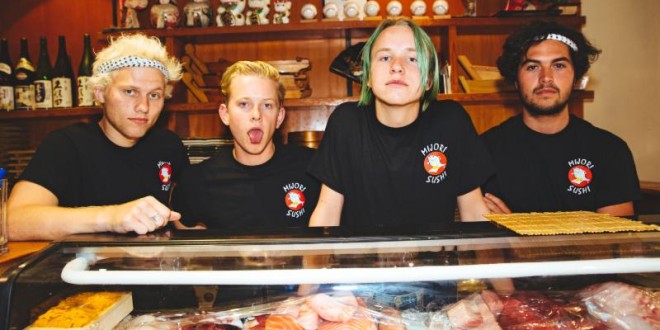 Weeks after wrapping their first North American headlining tour, Bay Area quartet SWMRS today announced a second leg of touring in the US and Canada that will kick off on June 17 in Calgary, ALB and wrap on July 17 in Lancaster, CA. Last month, SWMRS wrapped a massive North American headlining tour, performing 44 shows in 50 days, across 26 states and three Canadian provinces. With no plans of slowing down, SWMRS will perform two nights at The Observatory in Santa Ana, CA with FIDLAR this weekend before embarking on a UK/European tour on May 17. A complete list of upcoming tour dates and ticket information can be found HERE.

This morning, legendary radio DJ Zane Lowe shared an exclusive interview with SWMRS on his Apple Music Beats 1 show. Talking through demos and early recordings of several tracks with the band, Zane praised “We love the racket that you guys make and think your write incredible pop songs and put them on rocket-skates.” Listen to the interview HERE.

Lauded as #1 on Buzzfeed’s list of “17 Underrated Bands You Need To Be Listening to ASAP”, SWMRS released their debut album Drive North in February via their own Uncool Records. Recorded in the band’s hometown of Oakland, CA, the album was produced by FIDLAR frontman Zac Carper and premiered on RollingStone.com ahead of its release. Drive North is available nowHERE.

Noisey announced the album and premiered the band’s current single “Figuring It Out” praising the track as a “poppy foot-tapper filled with skate-gang vocals.” Nylon premiered the band’s video for the track, which was directed by fellow Bay Area artist Kreayshawn. Watch the video HERE and check out an exclusive performance of the song for Jam in the Van HERE.