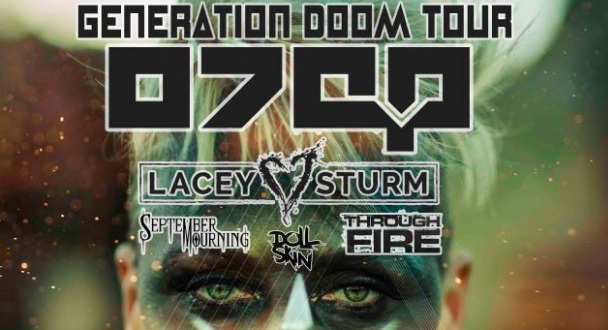 When attending an Otep performance, one can generally expect the following things:

1. The venue will be intimate.
2. A full spectrum of rock will be showcased, courtesy of the supporting acts.
3. And, decapitated pig’s head prop will make an appearance.

This week’s show in The Studio at Webster Hall in NYC—hosted by Tim No. 37—was no exception. A small part of a 19th century building, The Studio rocks a grungy atmosphere, uses incense in the women’s restroom, and has reasonably priced drinks for attending a show in this area (although it does pain this Wisconsinite to say it).

Perhaps most importantly, The Studio gives concertgoers access to the very acts they came to see. Make no mistake, the stage is small, but it’s also close. It feels like the band is looming just above the crowd, still near enough to be part of the action on the floor.

Voodoo Terror Tribe
The night kicked off with local support from New Jersey’s Voodoo Terror Tribe. Despite the floor being slightly empty toward the beginning of their act, the quartet packed a set full of groovy guitars and melodies. Gil Pan Zastor was an entertaining vocalist and used his small spot on the stage to full advantage, all the while hitting his notes or lightly bantering with the individuals in attendance. The set closed with “Wake of the White Devil”—which Zastor jokingly introduced as an ode to “the other white stuff.”

Doll Skin
Phoenix, Arizona’s Doll Skin was next with their special blend of “glitter punk.” Think The Runaways with a pop flair. Lead vocalist, Sydney Dolezal ruled the stage with her ability to switch between singing and screaming. Her between-song banter was also on point, whether she was listing her bandmates’ respective ages (16, 16, 17, and 19) and telling the crowd not to “be fucking creepy,” or leading a chant straight out of Mad Max: Fury Road.

Nichole Rich is also noteworthy for playing some of the most enthusiastic bass to grace a stage. Guitarist, Alex Snowden and drummer, Meghan Shea Herring matched this excitement—making for quite an impressive performance. The band’s performance of Alanis Morissette’s “Uninvited” also started the trend of interesting cover selections.

Through Fire
Through Fire’s amped-up performance infected the crowd with renewed energy—marking them as an excellent selection for the middle of the lineup. Guitarist, Justin McCain’s enthusiasm was almost overwhelming as he danced and scissor-kicked his way through songs. Highlights from the set include the band’s new single, “Stronger”—where concertgoers were instructed to throw their middle fingers into the air during the punchy chorus—and a cover of Ellie Goulding’s “Lights.”

Unfortunately, the sound for everything except the microphone seemed turned up at this point in the night. While it affected a couple of the first songs, vocalist Grant Kendrick was able to sing above the rest of the band.

September Mourning
Sound issues plagued September Mourning’s set, as attendees could see Emily Lazar sing her heart out, but not hear her over the drums (which also drowned out the guitars).

With that said, the performance was visually stunning. Surrounded by a horde of reapers in dark gear, Lazar glowed underneath the blue lights with her frosted hair and white-painted skin and costume. A black heart over her lips and a slash across her eye completed the ensemble. The uplifting comments made in-between songs fit the September Mourning character, who is a human-reaper hybrid caught between the living and the dead.

Otep
Once onstage, Otep slayed their performance with vocalist, Otep Shamaya using her voice, words, and message to guide the crowd along a transcendent journey. A small circle pit started almost immediately as bodies (politely) collided and pushed off from one another. On the sidelines, an overwhelming pulse of energy consumed concertgoers, ebbing and flowing with the music—by far, the heaviest sound of the night.

The band’s usage of props—which included a Donald Trump mask slung across the microphone stand (oddly reminiscent of a scene from William Golding’s Lord of the Flies), a Guy Fawkes mask donned by Shamaya, and the infamous pig head—heightened the ritualistic aspect of the performance. Shamaya further intensified the atmosphere by reciting poetry between songs, slowly pacing her words to increase the tension before providing a climactic release through the music.

The set spanned the band’s career and incorporated a plethora of tracks from their most recent album, Generation Doom. While a tad different from the older material, the new songs blended in seamlessly. “Generation Doom” and “Zero” struck a particularly strong chord in the pit, while “Equal Rights, Equal Lefts” touched a different side of attendees with its heavier hip-hop influence and sensual lyrics. (Other highlights include “Blood Pig” and “Crooked Spoons,” as well as the last encore song, “Royals”). Shamaya’s vocal versatility was on full display throughout the night, as she shifted from softer croons to full-blown screams.

Overall, the music was as powerful as Otep’s guitarist, Ari Mihalopoulos looks strong (read: very) and the perfect cap to a night jam-packed with rock.

Want to know more about Otep? Check them out on Facebook or catch them on tour!

Previous RadaR – G. U. N. (Give Up On The Now) Official Video
Next Nazareth back in Czech republic