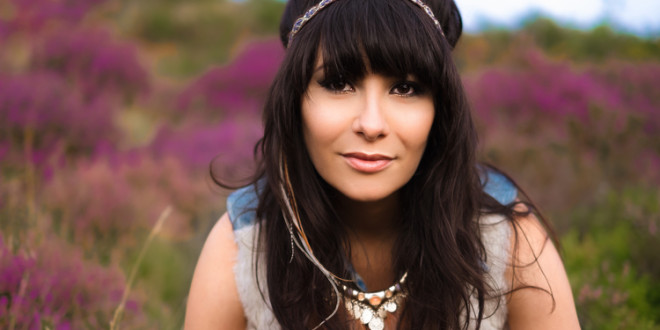 Vanessa Forero’s five track debut EP From the Uproar is a consistently good work of art that showcases how much talent Forero has to share with the world.

The record starts off with “Heaven Knows” which is a song that utilizes an acoustic guitar as the main instrumentation and that, in combination with Forero’s haunting voice, gives the track a mystical quality. It’s very in tune with the earth “flesh and bone/how long will you keep me here?” Forero asks, and the spiritual sounding background vocals help further tie this particular tune to the rawness of mother nature. The song builds up nicely, slow and steady, until it erupts into a climax that is well worth the wait and is sure to cast a spell over listeners.

“Same Boat,” again has that folk feel, with layered vocals adding some dynamics to the track. Forero’s vocals are crisp and clear, even as she sings about a subject that isn’t the most pristine, wondering if a relationship she is in should fold or keep going. It’s a relationship that Forero is clearly unsure of as she sings with some pain in her performance “will I be there in your arms or only in my head?” Forero even encourages the breakup, hoping that it will end on pleasant terms expressing “if you leave in time you’ll always stay on my mind.” It’s a very relatable song, and with a slightly pop rhythm “Same Boat” is sure to connect with many.

The first true ballad on the EP is “I’ll Be Wrong Again,” and tackles the subject of being torn down and trying to get back in the game. “If my heart would be brave,” Forero repeats over and over again and one can’t help but be touched deeply by that lyric as everyone has been hurt before. Here is where Forero shows her vulnerability in spades, and with her emotions on her sleeves, she is able to really showcase what a masterful songwriter and singer she is. It’s a song for anyone who has ever felt too deeply and with powerful and honest lyrics such as “love rides with fear” it cements itself as the best tune on the record.

“Raven” is unlike any other track on the LP as it uses strings and a pulsating percussion throughout the track to give it a raw and otherworldly feel. The chorus is very catchy but does not venture into pop territory, instead Forero sticks with her folk roots. In some ways, it sounds as if something sister duo The Pierces could have written as it does have a very mystical quality to it. With added effects, including the sound of rain, it comes across like an old time madrigal which is sure to remain in listeners minds long after the song is finished. It’s polished but also holds an experimental aspect to it, and with Forero delivering a magical vocal performance “Raven” is without a doubt one of the best songs on the album.

The bonus track “Anhela” is completely in Spanish, but one doesn’t have to speak the language to fully enjoy the track. It has a soothing tone to it and Forero delivers the lyrics with such a passion that it doesn’t matter if one doesn’t know exactly what the song is about to fall in love with it, and that is a mark of a good song.

All in all, Forero delivers immensely on From the Uproar, not a bad note to be found, so if you like folk/indie music that has a magical, earthy element to it check out the EP.