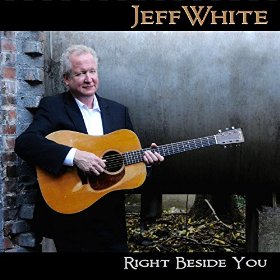 Jeff White – Right Beside You

Jeff White – Right Beside You

Longtime Nashville sideman Jeff White has released two solo albums but the time elapsed between the last one, 1999’s The Broken Road, indicates he’s been quite busy with other efforts in the meantime. Turning back to his solo career after all of this time implies that White felt compelled to seize this opportunity again rather than saunter off into the twilight of his career playing alongside other people. This is obviously a personal project, the proverbial “labor of love”, and White’s obvious knowledge of the genre runs deep and doesn’t have a false moment informing it. His new album Right Beside You features an array of guest stars that points to White’s obvious respect within Nashville’s highest circles. Country music royalty like Laura Weber Cash, Vince Gill, and Jerry Douglas, among many others, lend their talents to this impressive work.

The album’s opening track “Run Little Rabbit Run” is a sparkling, light-hearted romp that breezes by the listener. Vince Gill offers his services on mandolin throughout the album and his contributions here bring a great deal to the David Akerman penned song. White’s first original on the album, “Blue Trail of Sorrow”, attaches a vivid lyric to a superb musical arrangement prominently featuring Laura Weber Cash’s twin fiddle and Jerry Douglas on dobro. White and Gill’s vocal collaboration is important here. The title track takes a leisurely, but uptempo pace for a much more personal track than we’ve heard so far on the album. The opening duo come from a deep place in White’s heart, but they ultimately deal with familiar songwriting themes while “Right Beside You” cuts closer to the bone in every significant way. Perhaps most telling is the way White recorded his vocal. It’s one of the album’s most intimate singing performances and often sounds like White is sitting right next to you as he sings. Alison Krauss’ crystalline higher register joins White for some particularly apt harmony vocals.

Another legend joins White on the Bill Monroe classic “Travelin’ This Lonesome Road”. Bluegrass icon Del McCoury contributes tenor backing vocals that find a sympathetic match with White’s own voice. The usual cast of characters, including Vince Gill on mandolin and Jerry Douglas on dobro, make their presence felt once again. This is unusually top shelf bluegrass that doesn’t merely hit its marks, but will move many listeners with its moving songwriting and attention to melodic detail. The moodier strains of “Another Road” recall the introspective slant of the album’s title track, but the approaches are different. The earlier song is solidly within the bluegrass tradition while this song isn’t such a strict adherent of color or structure. Bekka Bramlett helped co-write this track and appears as a backing vocalist alongside Vince Gill.

Harmony vocals are a big reason for the success of another cover. White tackles “Ain’t Gonna Work Tomorrow” from the pen of A.P. Carter with surefooted confidence. It’s notable how the album’s cover songs are the expected picks – there’s no “Wayfaring Stranger” or odes to Kentucky foothills in earshot. “Ain’t Gonna Work Tomorrow” is far from a commonly known song but White plays it like everyone knows it or, in a different light, like a song he wrote and finished mere minutes before recording. There is an appealing freshness to how White tackles even the oldest of material that negates any unfamiliarity.
Other original songs like “Carry Me Across the Mountain” and covers like White’s take on the Dock Boggs gem “Wise County Jail” illustrate a musical artist with his own unique vision and a sturdy sense of history. The originals are distinguished and the covers are never slavish imitations of greater works. Instead, both modes are infused by White’s astonishing musical fluency and help make Right Beside You one of the year’s best albums.

Previous Billy Idol at House Of Blues in Las Vegas, NE on 05/04/2016
Next Colorado Monster Madness Announces New Venue for “Rock Out Jam”